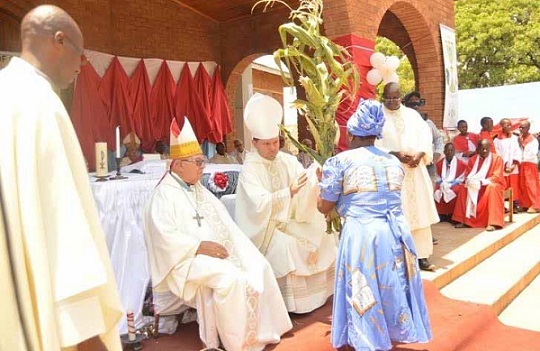 The Catholic Diocese of Gokwe in Zimbabwe recently celebrated its silver jubilee amid pomp and funfair with hundreds of people from all over the country joining the local Church to mark the historic event.

Held at St. John Cathedral, the celebrations were meant to commemorate the diocese’s achievements in twenty five years of its existence.

The Papal Nuncio to Zimbabwe, Archbishop Marek Zalewski, in the company of bishops and priests celebrated holy mass to bless the diocese and to thank God for the realistic milestones the diocese has accomplished so far in different sectors of life.

“From two primary schools, the diocese now has 20 primary, secondary and high schools and the diocese run some hospitals and clinics,” said the local ordinary of Gokwe, Bishop Angel Floro, during the occasion.

Bishop Floro thanked Bishop Bhasera for laying the foundation of the diocese from humble beginnings.

He narrated, “Apart from the four missions and two more created in 1991, there was nothing else except people. He did not have even a house to live in. I was privileged to work with him since 1992. I accompanied him when I doubled as Vicar General and Financial Administrator during those years, so I know pretty well the hardships and challenges he encountered and his enthusiasm and commitment to develop the diocese, to open new missions and put up infrastructure required for the diocese to operate properly.”

Bishop Floro went on to say, “It was not only about physical infrastructure but also to shape and strengthen the local community of Gokwe Diocese with the creation of the Presbyteral and Diocesan pastoral Council, the Pastoral Plan and Annual Pastoral Priorities. To me, working with him was a marvelous school where I learned how to run the diocese.”

At the moment, Gokwe Diocese is home to a plethora of home grown vocations with over 150 vocations to religious and priestly life.

The Diocese was created at the request of the late Rt. Rev Ignatius Prieto on 19 October 1991 by Pope St. John Paul II and Bishop Michael Bhasera was the first bishop to govern the diocese before he was appointed to take charge of Mavingo Diocese in 1999.

The first mission in the diocese was Kana, which was opened in 1954. It was followed by Chireya Mission opened in 1962. Nembudziya and Uganda Martyrs were opened in 1966 and 1970 respectively.

Since 1970, Gokwe was one of Hwange Diocese’s deaneries with four missions run by 8 priests, some brothers and a group of sisters as the bishop of Gokwe, Angel Floro puts it. At the creation of the diocese 10 priests, 15 sisters and 3 brothers were working in the then deanery.

Gokwe diocese has tremendously grown since 1991 from six to seventeen missions in a period of 25 years, from ten to thirty six priests and from two diocesan priests in 1991 to thirty. The diocese has immensely contributed to people’s right to education and health.

At its creation, Gokwe diocese was typically rural with little hope of growth but now the place has become into probably the fastest growing diocese in the country, a growth that is pointing to a city with hopes of industrial expansion and economic boom.