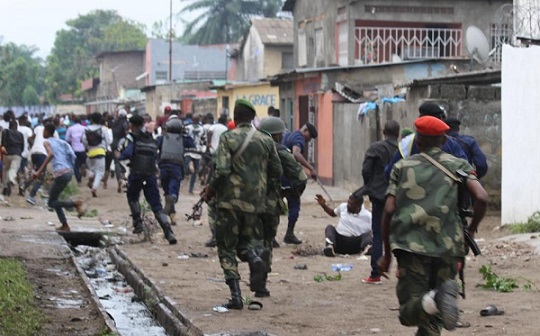 Security forces in the Democratic Republic of Congo used excessive force, including teargas and live ammunition, against peaceful protesters at Catholic churches in the capital, Kinshasa, and other cities on December 31, 2017, Human Rights Watch said today. When confronted by the heavily armed police and soldiers, some protesters, dressed in white, sang hymns or knelt on the ground. At least eight people were killed and dozens injured, including at least 27 with gunshot wounds, but the actual number killed and wounded may be much higher.

The shooting, beating, and arbitrary arrests of peaceful churchgoers by Congolese security forces violated the rights to freedom of worship, expression, and peaceful assembly, Human Rights Watch said. Those responsible for the unlawful use of deadly force should be prosecuted. With more protests planned, the authorities should lift the ban on demonstrations and allow people to worship without interference.

Since the shootings, Catholic Church lay leaders in Congo have called for peaceful marches following Sunday Mass on January 21, 2018, to press Congo’s leaders to respect the Catholic Church-mediated political agreement signed in late 2016. The agreement called for presidential elections by the end of 2017 and measures to ease political tensions. These commitments have largely been ignored, however, as President Joseph Kabila has held on to power through repression and violence.

In early December, the Lay Coordination Committee (CLC), a group of Catholic intellectuals, backed by Catholic priests and bishops in Congo, called for a protest on December 31. They appealed to all Congolese to protest the failure to implement the so-called New Year’s Eve Agreement and “to free the future of Congo.” Priests at parishes across Congo planned peaceful processions that would begin from their churches immediately following Sunday Mass. All the main political opposition leaders, civil society groups, and citizens’ movements supported the call to protest, with many explicitly demanding Kabila’s immediate resignation and a “citizens’ transition” to restore constitutional order and organize credible elections.

In the days leading up to the protests and on December 31, security forces arrested scores of people, including at least six Catholic priests, as well as pro-democracy activists, members of opposition parties, and other peaceful protesters. In an apparent attempt to prevent information about the protests from spreading, the government ordered telecommunications companies to block text messages and internet access across Congo on December 30. Service was only restored three days later.

On the morning of December 31, security forces surrounded at least 134 Catholic parishes in Kinshasa and erected roadblocks across the city, the church reported. Many Kinshasa residents were forced to show their voter registration cards, which serve as identity cards in Congo, to pass the roadblocks and continue to church. Some people, including those wearing or holding visible religious symbols – such as crosses, bibles, rosaries, and palms – were blocked from crossing the roadblocks. Security forces told some that there would be no Mass that day and they should return home.

Despite the heavy intimidation tactics, churches were packed, according to priests and congregants. Worshipers and others attempted to demonstrate following services in the cities and towns of Beni, Bukavu, Butembo, Goma, Idjwi, Kindu, Kamina, Kananga, Kisangani, Lubumbashi, Matadi, and Mbandaka, as well as in the capital. Across the country, the security forces quickly and often violently dispersed the protesters.

“At the beginning of the homily, I heard a loud boom from outside as the police fired teargas,” a priest in Kinshasa said. “But despite this, I continued with the service. Then there was a second boom, and a third, and this time the police had fired teargas within the church. It was then impossible to continue, so I had to stop the Mass to allow the worshipers to go outside to breathe.”

Kinshasa’s police spokesperson said on January 2 that five people were killed on December 31, including a policeman, two bandits known as “kulunas,” a so-called “terrorist,” and a member of the Kamuina Nsapu militia, who all reportedly died under circumstances unrelated to the protests.