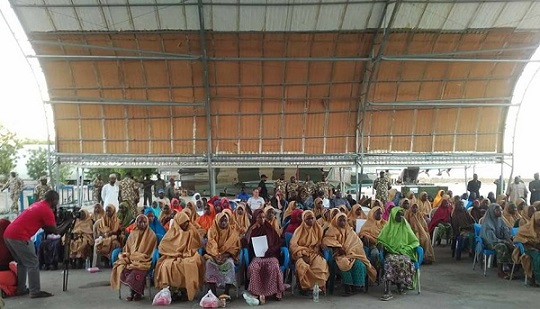 On Wednesday, terrorist group Boko Haram returned at least 76 Nigerian schoolgirls who were kidnapped in a raid last month.

More than 30 girls are still missing, some of whom are allegedly still being held, while others have reportedly died, possibly of thirst, according to reports from the New York Times.

On Feb. 19th, Boko Haram raided a girls’ technical school in Dapchi, a small town in northeastern Nigeria. Witnesses said the militants stormed the school and herded 110 students into trucks and drove away.

Father Maurice Kwairanga, who coordinates the Justice, Development and Peace Commission (JDPC) for the Nigerian Diocese of Yola, told CNA last month that in the wake of the kidnapping, “deep sorrow has descended on the once sleepy…town” of Dapchi.

Residents of Dapchi told the New York Times that they were “very, very happy” for the return of so many of the schoolgirls.

They added that when the militants dropped off the girls, they gathered several residents around them to warn them that the girls should not be allowed to return to school.

Of the girls still being held by the militants, sources told the New York Times that one of them, Leah Sherubu, is a Christian who has refused orders to convert to Islam.

Boko Haram is a militant Islamist group based in northeastern Nigeria. The group launched an uprising in 2009 hoping to impose strict sharia law on the country. It has been responsible for tens of thousands of deaths, targeting security forces, politicians, Christian minorities, and moderate Muslims in Nigeria’s predominantly Muslim north. In 2015, the group pledged allegiance to ISIS.

The group has carried out numerous attacks, suicide bombings, and kidnappings in recent years, including a 2014 raid during which militants abducted 276 schoolgirls. Of those girls, dozens have been freed, though more than 100 are still missing.

Nigeria’s president, Muhammadu Buhari said on Twitter that the recent release of the Dapchi girls came as a result of “backchannel” negotiations and that no ransom was paid.

The government has faced harsh criticism in the wake of the Dapchi kidnapping, and Fr. Kwairanga told CNA last month that while Buhari campaigned on a platform of eradicating terrorism, confidence in the government is “waning.”

According to the New York Times, advocacy group Bring Back Our Girls expressed relief at the return of the Dapchi girls, but added that they want the negotiations surrounding their release investigated.

The latest group of freed Chibok girls were released in May in exchange for as many as six suspected militants who were not identified, though some reports say the militants were high-ranking commanders in Boko Haram. There are also rumors of a large ransom paid, which critics fear could encourage more kidnappings.

Pope Francis has assured Nigerians of his prayers and recently met with a Boko Haram abduction survivor in a private audience. Nigerian Bishop Oliver Dashe Doeme has also urged the world to pray the rosary for an end to Boko Haram’s violence.