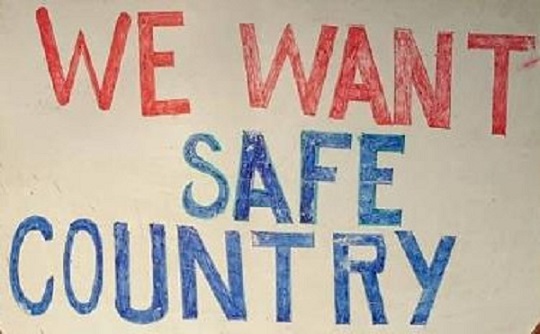 The Catholic Church in Nigeria is concerned about the escalating flow of Cameroonians into Nigeria, as violence in Cameroon continues to escalate.

The National Director of Caritas Nigeria, Father Evaristus Bassey, said in a statement that there has been increased agitation for “self-actualization in Cameroon” and this has led to the destruction of life and destabilization of the civic institutions.

He said the arrival of the refugees is compounding the poverty of the Nigerian people hosting them.

Bassey said Caritas Nigeria has carried out assessments in Nigeria’s Cross River State where most refugees have arrived and is seeking more information from other areas of the state.

The priest said the assessment showed that most refugees were living with relatives, in abandoned government quarters, unfinished buildings, or any available open space.

Bassey said the refugees were sharing scarce resources with their impoverished hosts and depending on them “for food and clothing as most of them fled for their lives with only the clothes they had on.”

In December, the Bishop Andrew Nkea of Mamfe – a major town of the South West region of Cameroon where most of the refugees originate -visited the refugees and came back with harrowing stories to tell about their conditions of living.

“Some of their stories are pathetic and the conditions under which they live are appalling,” Nkea said.

“They are scattered all over the place and sleeping on verandas and open spaces like people without a homeland. It was a great joy for shepherd and flock to be united again and the happiness of our visit almost moved us to tears,” he continued.

The current unrest began in the autumn of 2016, when disgruntled lawyers and teachers began protesting the use of French in courts using the Anglo-Saxon common law tradition (practiced in the English parts of the country) and in Anglophone schools. The demonstrations soon spread to the general public, and the calls for outright secession started growing.

The national government gave in to some of the lawyers’ and teachers’ demands, like creating a Common Law Bench at the country’s Supreme Court; transferring teachers and lawyers to areas where they would be most useful; and creating a National Commission to promote bilingualism and multiculturalism.

But the concessions were seen as too little too late. What looked initially like corporate demands had morphed into the political realm, with large numbers of Anglophones taking to the streets on October 1, 2017 in a declaration of “independence.”

They hoisted flags and sang the anthem of the putative Federal Republic of Ambazonia, which would be a homeland for the 20 percent of Cameroon which is English-speaking (the majority of Cameroonians speak French.)

The government’s response was violent, and fighting continues between soldiers and fighters claiming allegiance to ‘Ambazonia.’ The running battles have forced thousands of people to leave their homes.

The excessive use of force by government soldiers has been condemned by Cameroon’s bishops.

Nkea pointed to the heavy-handed response of the military following the killing of four soldiers by separatists in the village of Kembong.

“Kembong is actually the largest village in Central Ejagam with a population of about 5,000 people,” the bishop told L’Effort Camerounais, a Catholic weekly.

“It is a place that is normally booming with life, but when I went there all the streets were empty and it was virtually a ghost village and looking like a place after a war. I went straight to the parish and the rectory was full of men, women, and the young and old,” he said.

“There were about 30 people sitting on the veranda and parlor looking very destitute and I asked them what they were doing there. They told me the military had burned their houses and they had nowhere else to go, and that is why they rushed to the mission for protection,” Nkea recounted.

“Four soldiers had been killed on Monday and when soldiers got there a few hours later they started burning houses, beating people up and sending them away from the village,” the bishop explained.

“The government should find out who these assailants are, where they are from, track down and punish them according to the law. Soldiers have been killed in Mamfe, so should my house be burned down because I live in Mamfe? No, this is unacceptable,” Nkea said.

Still, President Paul Biya has promised to do away with the “terrorists” – as he calls the seperatists – and vowed that no part of Cameroon will ever be allowed to secede.

The government has reinforced its military presence in the Anglophone regions with the deployment of additional troops, imposed a curfew, and instituted travel restrictions on Anglophone Cameroonians.

The United Nations refugee agency says the measures “continue to trigger population movements toward Nigeria in search of safety and international protection.”

Bassey said Caritas Nigeria is appealing “for support for the mitigation of the humanitarian situation.”