Q & A with Sr. Reine Marie Badiane in Senegal, Helping Women and Children Claim their Dignity 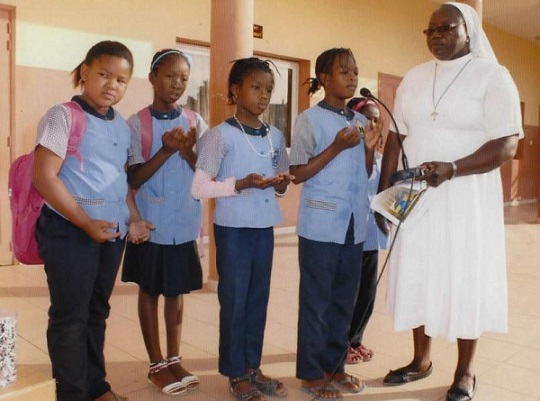 Q & A with Sr. Reine Marie Badiane in Senegal, Helping Women and Children Claim their Dignity

Although outlawed in the 1800s, slavery in Senegal still exists. Nearly 50,000 children as young as 3 still live in slavery conditions in Islamic schools called daaras, where spiritual guides, marabouts, teach them to read the Quran and speak Arabic.

The Senegal government has made some progress in shutting them down, according to a report from the U.S. State Department, but Islamic leaders and poor families who cannot care for their children resist, closing their eyes to the deplorable conditions in which the children live. Thirty to 40 children are crowded into poorly ventilated dormitories and sent out each morning to beg for food. Sometimes they are even sent to work in mines to earn money to keep the daaras going.

Efforts to end child slavery in Senegal began even before it was outlawed in Europe in the 1800s. Bishop Aloyse Kobès, a Spiritan from Alsace in France, was committed to building strong Christian families that were self-reliant and making sure children had both academic and practical education to free them from ignorance throughout Senegal.

He built a cotton-production factory and started a farm to teach food production and preservation. Needing help with this mission, he enlisted African women to work with him, founding the first religious congregation of women on the African continent in 1850. The Daughters of the Holy Heart of Mary took on his mission to promote education and self-sufficiency, and they continue this mission today.

I met their current leader, Sr. Marie Diouf, in January on the day she was elected vice chairperson of the Confederation of Major Superiors of Africa and Madagascar (COMSAM), in Yaoundé, Cameroon. It was exciting for me to learn about her congregation and to experience the pride the sisters have in being the very first congregation of sisters founded on the African continent.

When I asked to interview Diouf, she referred me to her first councilor, Sr. Reine Marie Badiane, who lives in Senegal.

This interview, which was conducted via email, was moving, and the privilege to meet sisters from the first African congregation of women was exciting. The sisters’ story reveals their determination to follow the lead of the unfailing power of the Holy Spirit that prevails amid the most difficult circumstances and setbacks. They planted a strong seed of religious life in Africa.

GSR: Sister Reine Marie, please tell me a little about yourself and your vocation to the Daughters.

Batiene: I was born in 1965, the oldest of four children. I was sickly, so my parents took me to a nearby dispensary of the Sisters of the Presentation of Mary from France. I was so scared of them, but they were so kind to me that I wanted to be like them. It was from this experience that my desire to be a sister grew.

I went to primary school in my village and then to a house for girls aspiring to be sisters in the southern region of Casamance. Here, Canadian sisters formed girls like me for local congregations like ours. I went to secondary school with them, where I learned to like English. After three years, I did high school in Ziguinchor, the regional capital, and lived in a house of my congregation’s for aspirants. After graduating, I went on to further religious life formation as a postulant and novice.

After religious profession in 1991, I was sent to study French, English and history for six years. Because I was good at English, I went to the University of Dakar, where I got a master’s degree in English and a teaching diploma to teach high school. After that, I taught school, was in administration and was a general councilor for my congregation. I am now the assistant general superior and a school principal for a school with 2,145 students from primary to secondary levels. We do not have many sisters or funds, so we all need to work for salaries.

You have had a busy life. Please tell me about the beginnings of your congregation in Senegal.

We have an interesting story. We were founded as soon as slavery was abolished in Senegal. Monsignor Kobès was anxious to educate orphans and youth of all ages, and he had great concern for women. He thought an aboriginal congregation of sisters would be the best answer because these women were used to the climate and they knew the language and customs of the people. He said: “It was necessary that African nuns familiar with the languages and customs of the country, able to circulate and stay everywhere, would catechize people of their sex, visit and care for the sick, knowing how to put themselves at the level of the native woman, and to inspire confidence.”

Did he do the formation of the first sisters?

No, we benefited from the gracious collaboration of a Sister of St. Joseph of Cluny, Mother Rosalie Chapellain. The Cluny sisters mentored us until the second half of the 20th century, when we took over for ourselves. But it was not easy for the first generations of our sisters. They suffered a lot but never gave up.

Tell me why they suffered.

They did not have much. Life was hard, and they were not much educated. They struggled, and at one time, they were almost forced to renounce their local congregation and join another one, but they were very determined to keep going. In our annals, they said, “We’d rather have died as Daughters of the Holy Heart of Mary than go to another congregation.” We are very proud that our founder trusted black women and believed that they deserved religious life, too.