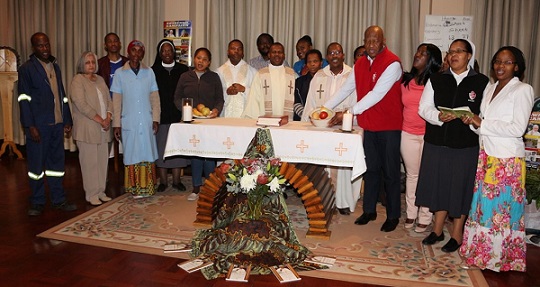 September 1 marked marked the Celebration of Spring Day, and the World Day of Prayer for the Care of Creation.

In South Africa, during Khanya House celebration of this day on Friday, September 1, Father Sakhi Mofokeng, the Secretary for the Southern African Catholic Bishops’ Conference (SACBC), department for Formation, Life, and Apostolate of the Laity, during his homily to the SACBC Staff, emphasised the important role human beings have to take in caring for the creation of God.

Father Sakhi said that when God created human being His tone changed. God first communicated with members of the Trinity, and said, “Let us create man in our image.”

God who is sovereign created man and entrusted him with the responsibility of taking care of the whole creation.

“Because of this responsibility the goal of man is (to) show God’s righteous rule over all creation,” he said.

Father Sakhi further said that humanity’s responsibility over the earth involves earth-keeping, wise use of the earth and its resources, raising Godly Children and converting the nations.

He also quoted Pope Francis’ encyclical, Laudato Si, where the Pontiff refers to the earth as a Sister whom we share our life with, and a beautiful Mother who opens her arms to embrace us.

He explained that in saying that, the Pope emphasizes the good relationship human beings should establish with the creation of God.

Furthermore, Father Sakhi highlighted the negative impact the human beings have caused on the creation of God, instead of taking care of it. “This Sister now cries out to us because of the harm we have inflicted on her,” he said, quoting Pope Francis.

Father Sakhi said that human beings have caused so much abuse to the earth. “Pope Francis through Laudato Si calls human being to conversion to find out the reasons why they were created as human beings different from the rest of creation,” he explained.

“Human beings are created in the image of God, to resemble God by loving creation and the responsibility of communicate with others and encourage them to take care of Creation,” he said in conclusion.