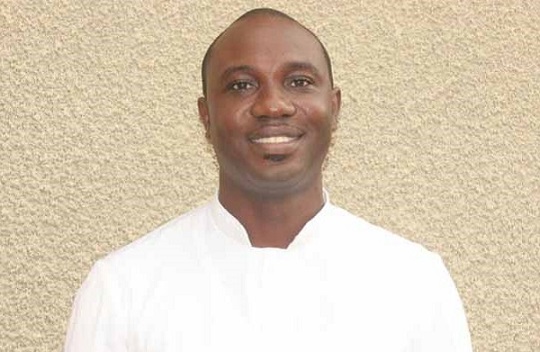 The Ghana Catholic Bishops’ Conference (GCBC) has appointed Father Dieu-Donne Kofi Davor of Ho Diocese as the new Executive Secretary of Social Communications at the National Catholic Secretariat (NCS) in Accra for a four-year term.

The appointment letter was signed by Most Rev. Joseph Osei-Bonsu, President of the GCBC and takes effect from September 1, 2016, making him the first Ghanaian and third Priest to head DEPSOCOM office at the NCS.

Until his appointment, Fr. Davor was the Director of Communications of the Ho Diocese and he takes over from Mr. Dan Dzide, who has ended his service with the NCS.

He is also to co-ordinate the training of personnel for Communications at the National and Diocesan levels and the development of audio visual, group media and cinema materials.

As the Executive Secretary, Fr. Davor is scheduled to help co-ordinate and manage the internet service of the Secretariat, supervise the Quick Print Centre and undertake any other activities that may be assigned by the Secretary General, the Episcopal Chairman of the Department or the Bishops’ Conference.

While in Accra, in consultation with the Archbishop of Accra, he would undertake pastoral assignments at weekend and wherever possible.

By virtue of this position, he becomes a member and the Secretary to the Board of Directors of the Standard Newspapers and Magazines (SNAM) Limited, publishers of The Catholic Standard.

In an interview on September 6, Fr. Davor thanked the Bishops’ Conference for the honour and confidence reposed in him, pledging to continue the good works of his predecessors.

He thanked his Bishop, Most Rev. Emmanuel Kofi Fianu for accepting and releasing him to serve the Church in a larger capacity and enhance Social Communications of the Church in Ghana.

He said promoting the Catholic Church’s activities would definitely be a side attraction of the cordial relationship established with the media in point.

“The office of DEPSOCOM will serve as the first point of call between the National Catholic Secretariat and the media. In other words, the office would be a reference point for any information regarding the Church and its activities.”

He said as the Executive Secretary, he would collaborate with Diocesan Directors of Communications and members of Catholic Association of Media Practitioners, Ghana (CAMP-G) to ensure that the voice of the Bishops reached every member of the Church irrespective of their location in the country.

To this effect, he would help to establish CAMP-G Chapters in all Dioceses, while intensive skills training and capacity building for all DEPSOCOM Directors would be one of his priority areas.

Fr. Davor noted that one could have very brilliant ideas but without the support of all stakeholders, they come to naught, stressing that “for every good organization, visibility was key to its success. The Church of God needs to be out there “in the faces of all” literally,” he added.

He said the great commission urges us to spread far and wide but a good brand sells and attracts many. Therefore, there is the need to build on the brand and ease its propagation.

He called on Catholics to be involved in the use of the Media as a predominant tool for disseminating information, noting that “It is true that the traditional media can definitely reach a mass but social media in this digital age can reach masses. All these tools are at our disposal now to be used for good as many as using for evil.”

He said building good media relations was key since “Our stories cannot be heard until most media have bought into it. A mutually beneficial relationship with media personnel will be very essential.”

He said the Church stands to gain in the process of disseminating our stories by having a cordial rapport with the Catholic Church where access to information is clear and smooth.

Fr. Davor was ordained September 13, 2008 and holds Masters in Communication Studies from the University of Ghana, Legon with Public Relations and Print Journalism as Major.

He has to his credit a publication titled “The changing role of Christian newspapers in Ghana: A case study of The Catholic Standard.”