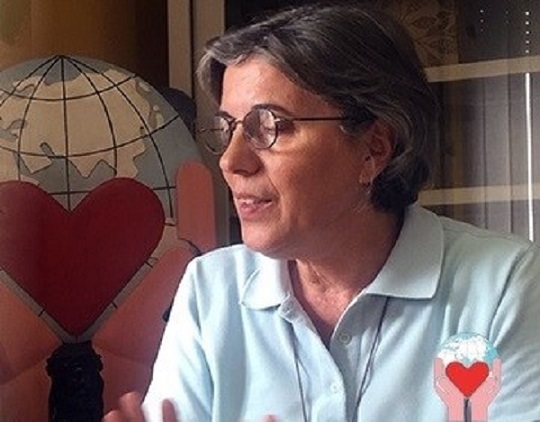 A Comboni missionary nun in Uganda who’d been out of the country for ten years recently returned to discover a widespread social problem she hadn’t seen before: children begging on the streets, often as part of a human trafficking ring. Working with the Ugandan government, Sister Fernanda Cristinelli is determined to do something about it.

Sister Fernanda Cristinelli, a Comboni missionary, has returned to Uganda where she had served for ten years, to witness a disturbing new phenomenon: widespread begging. According to Fides News Agency, children sit by roadsides all night, “begging for a few pennies.

“They cannot have a hot meal, go to school, play, wash, feel safe and secure. They are children from the Karamoja area, one of the poorest in the northeast of Uganda, who are forced by adults to beg in the capital Kampala,” Cristinelli told Crux.

Cristinelli says her return to Uganda has put her “in front of a phenomenon that I had never seen in Kampala years ago.

“Children aged 3 to 10, and girls from 12 to 14, are begging on the streets, the busiest of the capital, and adult women control them. The little ones jump towards cars in the unpredictable traffic of the streets of Kampala to beg, and the girls, with babies on their shoulders, do the same.

“In addition, these children live in decrepit tents at the edge of the city, in the mud when it rains,” Cristinelli said.

The Daily Mail quotes 32-year old Betty, a mother of five, whose survival and that of her family depends on the capacity of her two -year old daughter, Namuli, to make money begging.

“Like any mother, I feel bad about doing this. But without the money Namuli gets from begging we will die of starvation and have no money to put clothes on our backs. This is the only way we can stay alive,” she said.

In the face of such a “shameful social plague,” Cristinelli is now committed to bringing respite. She has decided to open a day-care center for children that will promote school and family reintegration programs.

“With the women in the diocese, we have tried to create awareness and literacy programs,” she said. “That is why we thought of creating a place near where they live, to accompany them to have a truly worthy life.

“For them, a point of reference where they can come, feel welcomed, play a bit, give them something to eat, [and] talk to them, is important,” Cristinelli said.

“The goal of our project is to make them feel that childhood is something different from being on the streets,” she said.

Begging: The hidden face of trafficking

Often street begging by kids in Kampala, like other parts of Uganda, constitutes the hidden face of human trafficking.

According to New Vision newspaper, children across the East African country are used to working in stone quarries, mining fields and fisheries. The girls are exploited to work as household helpers and babysitters, and many have been taken as child soldiers or slaves by the armed insurgent group the Lord’s Resistance Army.

Experts have blamed the rising phenomenon of child trafficking on poverty and unemployment, which continue to blight life for many in Uganda.

According to the Uganda Bureau of Statistics, the share of unemployed youth (national definition, 18-30 years) among the total unemployed persons in the country was 64 percent in 2012.

The World Bank, however, notes significant improvements in the fight against poverty in Uganda, as monetary poverty levels dropped dramatically from 31.1 percent  in 2006 to 19.7 percent in 2013. The country was also one of the fastest in Sub-Saharan Africa to reduce the share of its population living on $1.90 (purchasing power parity) per day or less, from 53.2 percent in 2006 to 34.6 percent in 2013.

“Poverty renders victims vulnerable and leads to rural-urban migration. Urban areas such as Kampala are the major transit and destination areas of internal trafficking,” said Moses Binoga, the coordinator of a Ugandan taskforce to prevent trafficking in persons.

A community liaison officer attached to Katwe Police station, Sam Nabongho, has also accused some powerful government officials of involvement in human trafficking. Norman Saad Kityamuwesi, a senior immigration officer in the ministry, says most Ugandans are unaware that trafficking in persons is against the law.

All these problems have continued to drive vulnerable populations to migrate to the cities, with the accompanying consequences of begging.

Cristinelli is not the only one concerned with the situation. The anti-trafficking task force is now working with the Ugandan Ministry of Gender, Labor and Social Development to take kids off the streets of Kampala. They’re transferring children to two shelters in Karamoja operated by the ministry that provides food, medical treatment, counseling, and family tracing.

“Since 2009, the taskforce has invited trainers from the Child and Family Protection Unit (CFPU) of Police to provide anti-trafficking training to over 3,500 police recruits and more comprehensive training to 800 officers in criminal investigation courses,” Binoga said.

Experts say a solution to the problem of begging on the streets also must involve moral and spiritual leadership.

During an audience with an International Symposium on the Pastoral Care of the Street on Sept. 17, 2015, Pope Francis said street children are robbed of their future.

“No child chooses to live on the streets,” the pontiff said.

“Sadly, even in our modern, globalized world, many children continue to be robbed of their childhood, their rights and their future,” the pope said. Lack of legal protection and adequate structures only aggravates their state of deprivation: they have no real family or access to education or health care.

“Every child abandoned or forced to live on the streets, at the mercy of criminal organizations, is a cry rising up to God, Who created man and woman in His own image,” Francis said. “It is an indictment of a social system which we have criticized for decades, but which we find hard to change in conformity with criteria of justice.”

It is this type of picture that Sister Fernanda Cristinelli wants to change.