The Peace Builders of Northern Kenya: Model Spreading to Other African Nations 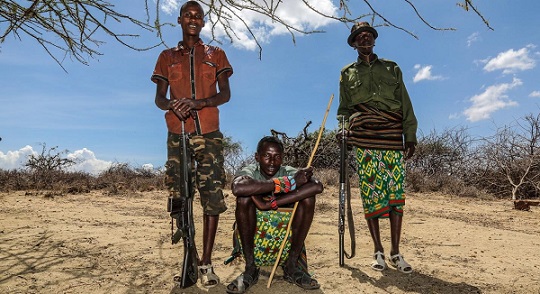 The Peace Builders of Northern Kenya: Model Spreading to Other African Nations

An innovative research-led model for building peace has been pioneered by an Irish Catholic priest and his Shalom Centre colleagues working in areas of Northern Kenya where assault rifles are as common in households as cooking pots.

Lawlessness is prevalent in the isolated areas of Kenya bordering Uganda, South Sudan, Ethiopia and Somalia, and family possessions include, on average, 1.6 AK-47s, the weapon of choice also of organized cattle-rustling gangs.

The Shalom Center for Conflict Resolution and Reconciliation, founded by Fr. Patrick Devine in 2009, which works as well in the slums of Nairobi, has cultivated a unique approach to conflict resolution, its success recognized and celebrated with a host of international awards.

And the model is expanding into other parts of Africa, starting with Côte d’Ivoire, Tanzania and the Central African Republic, with further plans to establish centres as well in Ethiopia, South Sudan, Nigeria and the Democratic Republic of Congo.

The model’s success is founded on extensive research into areas of complaint and issues that drive conflict then working with key community opinion-shapers — elders, women, youth and influential chiefs — to reach a common understanding of both the history and current definition of a conflict’s source, while building trust and co-operation to reach solutions.

Through workshops, Shalom is creating a legacy of conflict resolution, training to date more than 9,600 community leaders as peacemakers.

The philosophy of Fr. Devine, a 29-year veteran of African ministry: Conflicts are created by unmet human needs and the inability of weak institutions to help people actualize their potential. Shalom’s peaceful coexistence goal is simple: “To help the people become the architects of their own future.”

Shalom’s grassroots-based methodology, he says, embraces prevention and transformation — “delving deep into the social, economic, historical, cultural and religious factors that contribute to extremist behaviours that cause significant destruction and trauma to individuals and communities. Conjecture and speculation are no basis for policy making.”

Conflict in the region can be linked to several primary causes: scarcity and mismanagement of core environmental resources, infrastructure insecurity, weak institutions and the political economy of governance, historic tribal land and cultural conflict, all contributing to an unhelpful proliferation of illegal small arms.

“Every conflict has a memory,” says Fr. Devine, honoured in 2013 with the International Caring Award, and recently nominated for Ireland’s prestigious Tipperary International Peace Prize. “When the causes of conflict are not only identified, but also agreed upon by those involved, peace-building techniques create a way to look forward to a constructive future.”

Nairobi-based Shalom Centre’s international research and field staff are expert in conflict management theory and practice. All have at least a masters’ level education. “And I have never met a group with the persistence, commitment and consistency of Shalom staff,” says Fr. Devine.

The goal is not what he calls “negative peace,” or just an end to fighting but rather “positive peace,” where both sides in a conflict see the benefits of protecting the others’ security and wellbeing.

Fr. Devine explains why he founded Shalom: “I didn’t want to spend another 25 years just dealing with the symptoms of conflict and poverty, nor just putting money through a sieve without substantial endurable results.”

“Our centre helps people in this region emerge from patterns of ongoing conflict, an environment in which people are persistently killed, maimed and displaced, preventing social and religious values, such as truth, justice, peace, mercy and reconciliation, from taking deep root. Nor can development be sustained if schools, hospitals, programs, and religious centres are regularly made inoperable due to conflict.”

Fr. Devine underlines the non-sectarian nature of the centre’s work. “Shalom should not be owned by any one religious tradition,” he says. “If we can bring about peace in the world, we can all find our path to God.”

At a May EU meeting in Brussels to address the humanitarian situation in Africa, Yemen and Syria, Joe McHugh, Ireland’s Minister of State for the Diaspora and Overseas Development, noted the impossibility of sustainable development without peace.

He singled out Shalom’s “great work” and lauded the centre for making inroads in “interethnic conflict reconciliation where, for the first time in a particular region even with drought and massive challenges, the peace is holding.”

“If there are examples working we should look to them and support them.”

“What particularly impresses me is Shalom’s theoretical underpinning focused on education, empowerment, and transcending ethnic and religious boundaries in order to address the root causes of conflict,” she says.

“Rev. Dr. Devine has demonstrated that Shalom is an institution that speaks not only through the verbal articulation of its guiding principles but predominantly through its deeds. While much remains to be done, their work is clearly making a difference from individuals to entire communities – a wonderful achievement.”

“From the beginning, I was struck by the Shalom Centre’s methodology to resolve conflict and promote peace, which avoided quick fixes to problems that had existed for years, if not generations. There was something about ‘taking time to work with people’ that struck me as new. The approach involved working directly with local communities and their leaders, taking time to build relationships between communities, taking time to build peace.”

The Shalom Centre for Conflict Resolution and Reconciliation is supported by partner organizations and a network of visionary donors, primarily from the United States, United Kingdom and Ireland.

With a budget of less than $1M US per year and low (7%) overhead costs, Shalom leverages the donations of its supporters to maximize its work on the ground in tribal areas, particularly in the semi-arid terrains, and in the largest slum settlements in urban centres of Eastern Africa.

The Center focuses on the root cause of violence in the tribal lands of eastern Africa. It was created in 2009 in the wake of persistent widespread violence and dislocation across Northern Kenya, and in the aftermath of the disputed Kenyan elections. Shalom has made a major impact on peace initiatives in this vital strategic area of Africa.

The Centre’s work is strictly non-sectarian and closely aligned with civil society organisations. Fr. Patrick Devine serves as the organization’s executive director, leading an international team of conflict resolution experts from various religious backgrounds and disciplines who are based in Kenya and neighboring countries.

Conduct research among local communities into the causes of violence.

Work with local leaders and influential opinion shapers to ensure they are part of the long-term solution to preventing conflict; engaging them in problem-solving workshops.

Promote the construction and development of projects that benefit multiple groups in a community, including those on opposite sides of a conflict.

Conduct peace education in primary and secondary schools and with groups of influential opinion shapers in conflict environments, aimed at delegitimizing the use of force in solving conflicts.

Shalom benefits from Memoranda of Understanding with the governments of eastern Africa that comprise the Intergovernmental Authority on Development (IGAD). The Centre also partners with international and regional colleges and universities on peace-building courses, as well as religious association and councils in Africa.

High-profile speaking engagements help raise awareness of this successful peace-development model so it can be implemented in other conflict environments. Last year, Fr. Patrick lectured at Harvard Law School, and in January gave a presentation to a group of Washington D.C. diplomats, academics and peace practitioners on preventing radicalization and extremism.