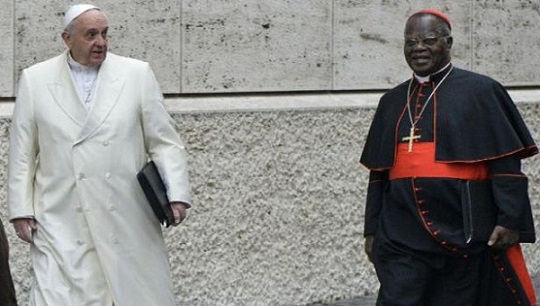 A transition at the top is looming in one of the world’s powerhouse Catholic nations, as Pope Francis on Tuesday appointed a new coadjutor bishop in the Archdiocese of Kinshasa in the Democratic Republic of Congo, effectively laying the groundwork for the eventual departure of 78-year-old Cardinal Laurent Monsengwo Pasinya.

A onetime de facto head of state in Congo, Monsengwo will be a hard act to follow – a high-profile prelate and papal confidante who’s more or less incarnated the African Catholic experience for a half-century, in which Catholic leaders often end up playing explicitly political roles that would seem odd to Western sensibilities about church/state separation, because the Church is sometimes the only institution that enjoys basic social trust.

On Tuesday, Francis tapped Archbishop Fridolin Ambongo Besungu, a Capuchin and the former head of the Archdiocese of Mbandka-Bikoro, as the “coadjutor” in Kinshasa, meaning that he has automatic right of succession when Monsengwo steps down.

With a population of 80 million that’s estimated to be around 80-85 percent Christian, roughly half of that total Catholic, Congo is already one of the world’s largest Catholic nations and is destined to grow. Based on demographic projections, by 2050 Congo will be the largest Catholic nation in Africa and the fifth largest in the world, behind only Brazil, Mexico, the Philippines and the United States.

The 58-year old Ambongo has a background in moral theology, having studied at the prestigious Alphonsian Academy in Rome, run by the Redemptorist order. He’s a former university professor and Capuchin superior, who was originally named the bishop of Bokungu-Ikela in 2005, at the age of 44, and then took over as the Archbishop of Mbandka-Bikoro two years ago in 2016.

All things being equal, Francis, a Jesuit himself, seems to like bishops with a background in religious life, admiring in particular the penchant for collegiality and consensus religious orders tend to foster.

Although it will be up to the pope when the time comes, Ambongo could inherit not only leadership of the Church in Congo but also Monsengwo’s spot as one of the pontiff’s nine cardinal advisers from around the world.

Francis created a council of cardinals in April 2013, just a month after his election, and has used the body not only to discuss reform of the Roman Curia but virtually for every major governance decision he’s made.

In any event, Ambongo will have some big shoes to fill attempting to follow Monsengwo, who’s been at the center of almost every social and political drama in his country since being named a bishop in 1980 by St. Pope John Paul II.

Back in the early 1990s, what was then Zaire was feeling its way towards life without strongman Mobutu Sese Seko, who ruled the country from 1965 to 1997. A transitional “High Council of the Republic” needed someone with moral authority and a reputation for independence to lead the process of drafting a new constitution, acting as the de facto national leader during the fin de regime period.

Nobody from the political class fit the bill, so the nation instead turned to the then-Auxiliary Bishop of Kisangani, a polished and urbane cleric named Laurent Monsengwo Pasinya. He not only served as president of the council, but also as transitional speaker of the national parliament in 1994.

Monsengwo gets mixed reviews for how he handled the role – in part because it wasn’t really his diplomacy that brought an end to Mobutu’s rule, but the First Congo War and the armies of Laurent-Désiré Kabila. When Monsengwo later spoke out against Kabila’s anti-democratic tendencies, charges that the archbishop had been “pro-Mobutu” became a staple of government rhetoric.

Some Catholics agreed that Monsengwo had been overly soft, especially given the persecution they’d experienced at the hands of the Mobutu regime.

At one point, Mobutu ordered all Christians in the country to adopt non-Christian names, and at another he ordered crucifixes and pictures of the pope to be taken down in Catholic schools and replaced with images of himself.

For a time, Cardinal Joseph-Albert Malula of Kinshasa was forced into exile.

Admirers, however, say Monsengwo was trying to find a third way between dictatorship and chaos, noting that it’s one thing to stand on the outside of the political process and toss bricks, quite another to remain within it and try to get something done.

Born in Mongobele, in what is now the DRC, in 1939, Monsengwo belongs to the royal family of his Basakata tribe; his name actually means, “relative of the chief.” As a young man he was sent to Rome for studies, first at the Pontifical Urbaniana University, home to seminarians from the developing world, and then to the prestigious Pontifical Biblical Institute.

He also put in a stint at the Pontifical Biblical Institute in Jerusalem, where one of his teachers was a promising Italian Jesuit named Father Carlo Maria Martini, who went on to become the cardinal of Milan and one of the leading intellectual lights of the Catholic Church. In Jerusalem, Monsengwo became the first African to earn a doctorate in Biblical studies from the institute.

After doing pastoral work and teaching in the local seminary during the 1970s, Monsengwo became a bishop in 1980, at the tender age of 40. He was consecrated by Pope John Paul II himself during the pope’s May 1980 trip to Zaire, his first outing to Africa.

Monsengwo was immediately elected the president of the Congolese bishops’ conference, a post he would hold again in 1992. He became the Archbishop of Kisangani in 1988, and the Archbishop of Kinshasa in 2007. Benedict XVI raised him to the rank of cardinal in November 2010.

Not only did Benedict make him a cardinal, after a long stretch in which many people thought Monsengwo’s window of opportunity had closed, but in 2008 Benedict tapped Monsengwo as the relator, or general secretary, of the Synod of Bishops on the Word of God. In February 2012, Benedict also invited the African prelate to deliver the Vatican’s annual Lenten retreat.

(Remarkably, Monsengwo is said to be at least passable in fourteen languages, including the major European languages and a variety of tribal dialects.)

Early signs are that Ambongo may be just as much a protagonist in Congolese affairs. During a recent controversy around Kabila’s delaying of elections that could lead to a transfer of power, Ambongo strongly defended Catholics who organized pro-democracy (and thus anti-government) demonstrations that drew a violent response from Congo’s police and security forces.

A statement from the bishops’ conference signed by Ambongo and another prelate said they “deplored the attack on human life,” and offered condolences to the families of the “innocent victims.” They also called for a “serious and objective investigation” to determine who was responsible for the violence.

In their statement, the bishops also condemned “the violation of freedom of worship guaranteed in any democratic state, the desecration of certain churches, and the physical aggression against the faithful, including Mass servers and priests.”

In general, Ambongo has been a leader among bishops demanding that Kabila not see another term as president and permit free and fair elections to take place.

One footnote about the succession in Kinshasa: If Ambongo were to take Monsengwo’s place on the council of cardinal advisors, he would become the second Capuchin – Cardinal Sean O’Malley of Boston, another Capuchin, also serves on the council.