Church in Ghana Continues to Mark 125 Years of Catholicism 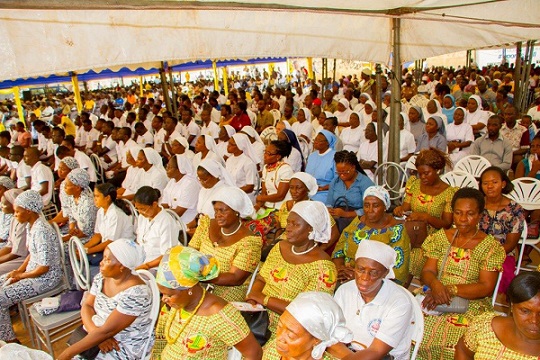 Church in Ghana Continues to Mark 125 Years of Catholicism

The Catholic Archdiocese of Accra on January 31, held a Eucharistic celebration in Accra to mark the remembrance of the first ever Mass celebrated on the soils of the national capital by two Society of African Missions (SMA) Fathers.

The Mass which forms part of activities marking the 125th anniversary of the mission in Accra, brought together thousands of Catholics including the laity, clergy, religious and well-wishers among others.

Also present were the Metropolitan Archbishop of Accra, Most Rev Charles Palmer Buckle and emeritus bishop of the Keta-Akatsi diocese, Most Rev. Anthony Kwami Adanuty.

Speaking in his homily, first emeritus bishop of the Keta-Akatsi diocese, Most Rev. Anthony Kwami Adanuty called on Catholics and Christians at large to embrace the new evangelisation.

He added that the new evangelisation as being propagated by the church, is not in any way a call to preach anything new but to find more appropriate ways to disseminate God’s words unchanged, to a world that keeps revolving.

Recounting the story in Luke 8: 22-25, Bishop Adanuty charged the congregation to rekindle their faith in God and renew their commitment to gaining salvation and the spirit of fellowship and communion. He said the symbol of the boat signifies the Church complying to the evangelisation mission of Christ and the storm is alerting christians to express their faith in their God always.

He further noted, “It is an evil generation that only sees Jesus as a worker of spectacular miracles.”

The commemorative Mass was followed by adoration of the blessed sacrament and a candle light procession from the John Evans Attah Mills high street to the oldest Catholic Church in Accra, Sacred Heart Parish, Derby Avenue.

Catholicism spread to Accra on January 31, 1893 when Rev. Fathers, Eugene Raess and Otto Hilberer of the Society of African Missions (SMA) were sent to Accra from Elmina to begin a new mission after the Elmina mission started in the year 1880.

The 125th anniversary of the Catholic mission in Accra was launched on September 21,2017 at the Holy Spirit Cathedral, with a call on Catholics to actively participate in the celebration and evangelisation.

The launch of the year-long celebration, which is on the theme: “125 years of Catholic Mission in Accra: Renewing our commitment to evangelisation”, also saw the inauguration of the Planning Committee, under the chairmanship of the Vicar-General of the Archdiocese, the Very Rev. Fr Francis Adoboli.

Recounting some of the major achievements of the church, Most Rev.Charles Palmer-Buckle said the Archdiocese, which started as a mission station, had grown in leaps and bounds to its current state, with a population of more than 400,000 Catholic faithful.

He added that within the period, it had given birth to the Koforidua Diocese and the Apostolic Vicariate of Donkorkrom. As well as several educational and health care facilities among others

“We cannot enumerate the number of churches and chapels, educational facilities, from first cycle through to secondary, vocational and technical to tertiary, hospitals, clinics and other healthcare facilities, as well as the many social service institutions,” he said.

An anniversary carnival and display of culture was held on December 30, 2017 at the El Wak Sports Stadium in Accra to celebrate the cultural diversity and unity of the Church in Accra.

The event saw performances from the various ethnic groups in the 10 regions of the country and from the St. Francis Nigerian Community in Ghana.

Speaking in an interview, the Metropolitan Archbishop of Accra, Most Reverend Charles Gabriel Palmer-Buckle said the carnival and cultural display was to demonstrate that the members of the Church were one people in spite of cultural diversity and called on them to emphasis unity in diversity.

He said: ‘’very often people turn to want to play upon ethnic differences, ethnic differences should enrich us and not to divide us, they should bring us to put everything together and be culturally cosmopolitan.

The anniversary has seen activities such as rosary pilgrimages, vespers, a focus on children as God’s gift to the Archdiocese.

Activities of the anniversary are aimed at three goals indispensable to the mission of the new evangelization: the spiritual growth in Christ and the development of all Catholics; the correct knowledge and intellectual appreciation of the Catholic faith and doctrine; and the spirit of fellowship and communion among the church members, societies and parishes, as well as in the archdiocese.