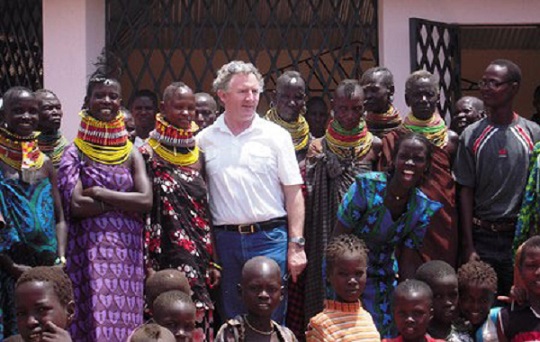 The Press Association has issued a memo (3 February 2017) stating that Fr Padraig Devine SMA, the founder and international chairperson of the SHALOM Centre for Conflict Resolution and Reconciliation, Nairobi, has been shortlisted for the prestigious 2016 Tipperary International Peace Prize.

Fr Devine’s innovative peacebuilding work is the subject of increasing recognition throughout the world with Government agencies and NGOs respectfully studying the work of the Shalom Centre.

Next week we will carry an in-depth interview with Fr Padraig following a recent visit the SMA missionary made to Washington DC.

The peace prize was inspired by the Jack Judge song, ‘It’s a long way to Tipperary’, which became the unofficial anthem of the British Army during WWI.

Soldiers marching to the Western Front sang the song and, when the guns were finally silenced at 11 o’clock on the 11th of November 1918, a soldier climbed on top of the ruined belfry of Mons, Belgium, and sang the song in jubilation at the thought of returning home alive.

In the early 1980s the Tipperary Peace Convention was founded. Since Tipperary was known the world over because of a ‘war’ song, its residents wanted to offer an alternative vision.

“We like to think that the modern Tipperary is now known for its efforts to promote peace and peaceful co-operation on a national and international stage,” a spokesperson said.

The winner will be announced by the Tipperary Peace Convention in the coming weeks.

We wish Fr. Padraig Devine and all the nominees every good wish and blessing.

All would be worthy winners and, as the Society of African Missions, we are particularly proud that the important peace and reconciliation work of one of our missionaries in Africa has been recognised.

For background information on this year’s nominees, please click here: