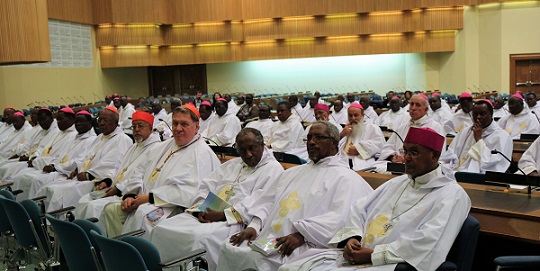 The Plenary Assembly of the Association of Member Episcopal Conferences in Eastern Africa (AMECEA) taking place in Ethiopia’s capital, Addis Ababa, was officially launched Sunday, July 15 in a celebration of “vibrant diversity” that has been described as a “colourful Eucharistic celebration conducted in the Ethiopian Catholic Rite”.

The Church leaders are meeting throughout this week under the theme, “Vibrant Diversity, Equal Dignity, Peaceful Unity in God in the AMECEA Region”.

“It is a timely subject because it deals with conflicts that we experience in Eastern Africa and here in the horn of Africa,” the Principal Celebrant at the Sunday event, Berhaneyesus Cardinal Souraphiel has been quoted explaining the theme of their Plenary Assembly, adding, “During this plenary, we will not only be looking for solutions, but we also pray for lasting peace in the region.”

Describing ethnic diversity that defines the Church in Eastern Africa as a divine gift to be treasured, Cardinal Souraphiel has explained, “We feel that ethnic diversity is a positive thing given by God and it is important that we respect each other and respect each other’s ethnic background and at the same time emphasize the human dignity that is in each one of us.”

During the week, AMECEA Online News has reported that there will be a workshop by the Dicastery on the Promotion of Integral Human Development, study sessions, and business sessions. The closing ceremony will take place on Sunday, July 22.

AMECEA Church leaders are holding their meeting alongside delegates from various Church institutions including the Symposium of Episcopal Conferences of Africa and Madagascar (SECAM), the United States Conference of Catholic Bishop (USCCB), Missio, SIGNIS, the Catholic Media Council (CAMECO), Catholic Relief Services (CRS), Vatican Radio, Church in Need, Association of Consecrated Women in Eastern and Central Africa (ACWECA), the Catholic international development charity in England and Wales (CAFOD), among others.