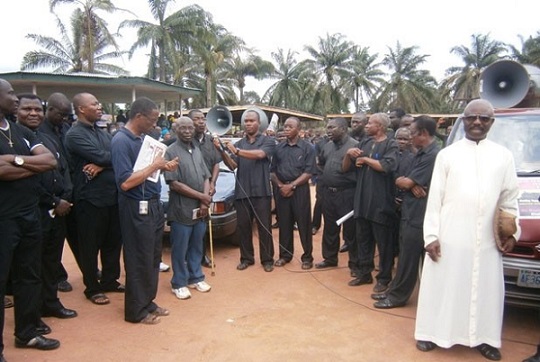 Pope Francis’s recent demand for all the priests of a Nigerian diocese to write him pledging loyalty, including accepting the bishop he’s confirmed, may seem to come out of left field, but in fact it builds on a similar request made by the Vatican in 2014 and rejected at the time by the dissident priests.

To the casual observer, a recent papal threat to suspend every priest from an entire Nigerian diocese might seem to have come out of left field. However, Crux has obtained evidence that the situation has been brewing for at least three years, following a similar Vatican demand for submission.

An ultimatum issued by Pope Francis earlier this month, insisting that every priest in the diocese write a letter apologizing for refusing to accept papal authority, was first made in a letter dated June 24, 2014, and signed by Italian Cardinal Fernando Filoni.

The Prefect of the Vatican’s Congregation for the Evangelization of Peoples, the Vatican department overseeing missionary territories, Filoni didn’t threaten to suspend the priests as Francis did on June 8. He does, however, insist that they accept Bishop Peter Ebere Okpaleke, appointed by Benedict XVI to the “beloved” diocese of Ahiara in 2012, “out of deep affection and profound solicitude.”

When the bishop was appointed, both priests and laity protested because Okpaleke is not from the area’s dominant Mbaise linguistic group. They demanded instead to have “one of their own” selected for the job.

Filoni told the dissidents in the 2014 letter that their “almost ideological and prejudicial opposition” to the bishop has “NO credible or justifiable motive.” [Emphasis in the original.]

According to the prefect’s letter, being “a son of your diocese” isn’t a primary factor for evaluating the appointment of a bishop. The Church, he says, “has other criteria,” including a person’s “human virtues, his moral and spiritual qualities, his pastoral experience, his capacity for guiding a community of the faithful.”

For the appointment of Okpaleke, Filoni says, bishops, priests, religious, and laity were consulted, both in Nigeria and Rome.

“And yet, some have claimed for themselves the right to impede him in the exercise of his pastoral ministry in the Diocese.”

In a segment of the letter addressed especially to the priests, who on the day of their ordination declared obedience “to their proper bishop, to their successor and to the Holy Father,” Filoni accuses them of disobedience, “which is inflicting a wound on ecclesial communion.”

Seeing this disobedience, he says, “I would therefore expect an act of sincere and profound repentance, presented in the form of a letter from all of you, signed individually by each of you, asking the Holy Father for forgiveness. I know that Pope Francis is waiting for such a sign of affection!”

He closes the letter expressing his support for Cardinal John Onaiyekan of Abuja, the national capital, who had also been appointed by Francis as a temporary administrator of the diocese. The priests and laity who reject Okpaleke protest Onaiyekan’s leadership, too.

Two months later, on August 22, 2014, a response was sent to the Vatican by the Association of Diocesan Priests, in the name of the priests and laity. It was allegedly signed by all but seven priests, however the copy obtained by Crux only has five names at the end of the 16-page long missive, only three of whom signed it.

They call for an “independent Vatican visitor” to have a “tete-a-tete” with them. “We are neither rebellious nor disobeying the Pope. On the contrary, we are crying for justice to be done in the Church of the Holy God.” [Again, the emphasis is in the original.]

The letter has 43 points, and is full of quotes from the Bible, the Catechism of the Catholic Church, and the Code of Canon Law. The latter is used to argue that they’re within their right in appealing for the pope to get personally involved to resolve the matter, together with the Vatican’s Secretary of State: “We have impeccable confidence in them.”

They claim to have both “permission and obligation” to protest the bishop, and throughout the letter they mostly do so by pointing out that no bishop from rural Nigerian dioceses has recently been created, and that it’s time for them to get a bishop who is “close to us.”

The priests write that their refusal to accept the papal appointment of a bishop is not disobedience, and that Ahiara will continue to be the “Ireland” of Nigeria, as the region is often called for the great number of vocations to the priesthood, many of whom are then sent to missionary territories.

In his June 8, 2017, communication, Francis gave the priests of the diocese until July 9 to submit a letter of obedience, or face suspension from office.