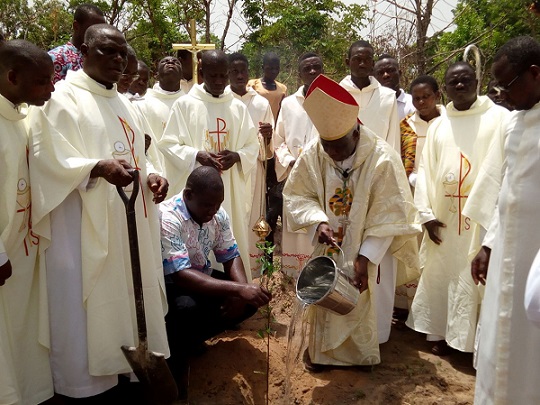 Bishop Gabriel Mante of Jasikan in Ghana recently re-launched the “Arbor Week” celebration in his diocese with a call on the Priests, Religious and lay faithful to intensify education on tree planting.

He asked for the extension of the tree planting to learning institutions and families and encouraged the media to promote environmental protection through tree planting.

Bishop Mante said the re-launch, which took place on Tuesday, April 11, was aimed at an ecological conversion and responsible change of direction in relationship with the environment.

Observed in many countries at the beginning of the rainy season, Arbor Day is a day set aside to encourage individuals and groups to plant and care for trees as part of efforts to fight climate change.

He said it was a response to the invitation of Pope Francis to seriously listen, consider and resolve to help repair the damage humanity was causing the earth “our common home”.

Dilating on the Pope Francis’ Encyclical Laudato Si, Bishop Mante said its name was taken from the invocation of the Canticles of creatures by St. Francis of Assisi: Laudato Si “Praise be to you, my Lord through our Sister, Mother Earth, who sustains and govern us, and who produces various fruits with coloured flowers and herbs.”

The Canticle, he said, called to mind that the earth, our common home, “is like a sister with whom we share our life and a beautiful mother who opens her arms to embrace us”.

He said the Holy Father brings to the attention a very important fact that we and the rest of the world where forests are suffering cannot ignore, noting that it has brought all persons and peoples into dialogue, all institutions and organizations that share this same concern for our common home.

He noted that re-launch was also to share in the hope and conviction of Pope Francis that ‘despite the mistreatment, abuse and laments of Mother Earth, all is not lost and that human being while capable of the worst, are also capable of rising above themselves, choosing again what is good and making a new start.”

He noted that in 1998, the Ghana catholic Bishops’ Conference launched a tree planting programme in Kumasi, to be carried out annually in the first week of June of which Jasikan Diocese launched it in the last week of May 1998 during the Annual Diocesan pilgrimage to Tokuroano.

The Bishop lamented that the programme in the Diocese suffered the same fate as the national one, because the success or failure of the national programme depended on those of the Diocesan ones.

He said by the re-launching the Week, Catholics in the Diocese were being encouraged to plant trees to safeguard the earth and its natural resources, and avoid the unprecedented destruction of the environment.

He stated that “Our re-launch of the Arbor Week, even if it has not yet affected this part of Ghana is our unqualified admission of the truth that we have destroyed extensive areas of the land of Ghana through mining, whether legal or illegal.”

He noted that it was an acceptance that Ghanaians were needlessly causing costly damage to the major rivers and other water bodies in the country, stressing that “we are poorly informed and unaware of the damage to our health and untimely deaths due to the use of dangerous chemicals as mercury and cyanide are causing high and vibrant proportion of Ghana’s population.

To commemorate the re-launching, the Priests, Religious and lay faithful joined the Bishop to plant trees, a sign of encouragement to others to also embark on tree planting in their various communities.

The Bishop prayed that in the next five years, the communities in the Diocese become a forest hence avoid suffering from the climate change and global warming.

In an interview with the faithful, they noted that the re-launch would help them appreciate and understand the importance of a clean and sound environment.