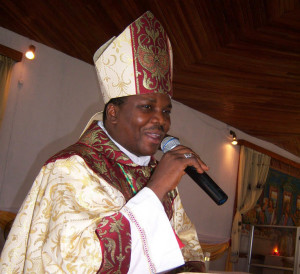 VATICAN CITY — Pope Francis is to make his first trip to Africa in November, on a six-day, three-nation visit expected to generate an unmatched “spiritual energy and reawakening” on a continent Cardinal Robert Sarah says will save the family and save the Church.

The Vatican announced on Thursday that the Pope will visit Kenya, Uganda and the Central African Republic from November 25-30. Details of the trip have yet to be released.

The itinerary is further evidence of the Pope’s desire to focus on the developing countries of the world. The Pope first announced his intention to visit Africa in January, during an in-flight press conference returning from the Philippines and Sri Lanka.

Earlier this year, Pope Francis received in private audience the Standing Committee of SECAM (Symposium of Episcopal Conferences of African and Madagascar).

His Excellency Emmanuel Badejo, Bishop of Oyo Diocese, Nigeria, and Chairman of CEPACS (the Communications Commission for SECAM), responded to Thursday’s news, telling Aleteia: “Africa will surely be especially blessed by a visit of the Holy Father Pope Francis in November. I was fortunate to have been present at the visit of the Standing Committee of SECAM to the Holy Father in February, where SECAM invited Pope Francis to visit Africa. His Holiness’ prompt response is a very strong message about how much the Pope loves Africa and Africans.”

“During that visit,” Bishop Badejo explained, “the Pope enjoined SECAM to speak up more clearly to the world to stem ideological colonization, especially by educating the youth and strengthening the family.”

Indeed, during the February meeting, Pope Francis told the African bishops: “The greatest need is for a model of education which teaches the young to think critically and encourages growth in moral values (cf. Evangelii Gaudium, 64).”

Bishop Badejo continued: “The entire Church in Africa has since been praying, reflecting and working to restate to the world those positive values that distinguish African culture, edify the youth and cultivate Christian family life.”

He added: “In the Pope’s visit I envisage a great opportunity for the confirmation of Africa’s faith in God and the Church and the projection of the enduring and ennobling values that have kept Africans going through the numerous challenges on the continent.”

“Nothing can match the spiritual energy and reawakening that the visit of a Pope will generate on our African continent, which still grapples with war, terrorism, and the crisis of migrating and internally displaced peoples,” the bishop explained.

“The presence of Pope Francis on African soil will surely lighten the burden of our irrepressible populations. Africa welcomes Pope Francis, messenger of love and mercy.”

Ahead of the October Synod on the Family, the bishops of Africa have also taken up Pope Francis’ call to strengthen the family through various initiatives, including the release of a new book entitled, Christ’s New Homeland – Africa, published by Ignatius Press.

The book is the fruit of a June 2015 meeting in Accra, Ghana of 5 cardinals and 45 bishops representing 50 African countries. The prelates gathered to prepare for the October Synod on the Family.

In his opening remarks at the meeting, which are included in the new book, Guinean Cardinal Robert Sarah — Prefect of the Congregation for Divine Worship and the Discipline of the Sacraments — encouraged the bishops of Africa to “speak with one voice” during the upcoming synod:

“I encourage you to speak with clarity and with one credible voice and with filial love of the Church. Be conscious of the mission of the Church; protect the sacredness of marriage, which is now being attacked by all forms of ideologies that intend to destroy the family in Africa. Do not be afraid to stress the teaching of the Church on marriage.”

And in an interview with the French magazine Famille Chrétienne, Cardinal Sarah described in part the way this will be done:

“At the synod next October we will address, I hope, the question of marriage in an entirely positive manner, seeking to promote the family and the values that it bears. The African bishops will act to support that which God asks of man concerning the family, and to receive that which the Church has always taught…. Why should we think that only the Western vision of man, of the world, of society is good, just, universal? The Church must fight to say ‘no’ to this new colonization.’

The title of the book, Christ’s New Homeland – Africa, comes from a phrase used by Blessed Pope Paul VI, the first pope in modern times to visit Africa.

Pope John Paul II made 14 apostolic visits to Africa during his 25-year pontificate. And Africa most recently welcomed a Roman pontiff with Benedict XVI’s visit to the nations of Cameroon and Angola in 2009.

With his trip to Africa, Pope Francis will have visited all continents except Oceania in the first three years of his pontificate. The trip will mark Pope Francis’ eleventh apostolic visit outside Italy since his election in 2013.

He is schedule to visit Cuba and the United States from September 19-27.