Women of Africa, Go Make a Difference in the World – Cardinal Njue 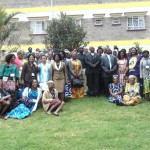 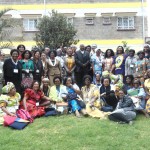 Cardinal Njue with the Women participants of the Pan-African meeting


His Eminence, John Cardinal Njue of Nairobi, Kenya has exhorted women in the Catholic in Africa to go out and make a difference in their communities and society in general by expressing their faith openly in all activities that promote the culture of justice, peace and reconciliation and development in Africa.

Addressing the closing session of a meeting of Pan-African Catholic Women in Nairobi, Cardinal Njue also asked the women to be vigilant and strive to defend the Church in the face of new forms of ideologies and attacks that are being used by some organisations and individuals with the aim of destroying the Catholic Church.

“I encourage you to uphold your dignity as women, as mothers and as wives to use your persuasive power to defend the Church at all times and for the promotion of peaceful co-existence on our dear continent-Africa” the Cardinal appealed.

Cardinal Njue urged the women to return to their countries and families more renewed and more reconciled with their husbands and children. He reminded them that “a woman is the image of God’s love like man is the image of God’s paternity”. Therefore, he invited them to live the sacraments of their faith”. “Remain close to your Church through prayer, the observance of the Word of God and in your daily endeavours”, he added.

He concluding by assuring the women of his prayer and that of the bishops of Africa in their lay apostolate.

An explanation on a SECAM poster for the celebration of the African Year of Reconciliation from July 29, 2015 to July 29, 2016 was presented to the Cardinal by Re. Fr. M. Edouard Mombili, Secretary General of the Episcopal Conferences of Central Africa (ACEAC). Afterwards, a copy of the poster was given to Cardinal Njue by Rev. Fr. Samuel de Jesus Paquete, Second Deputy Secretary General of SECAM.

The meeting has as its theme: The African Woman Moving Towards the African Year of Reconciliation. Africancountries. The participants came from eighteen African countries.

The three-day meeting has been organised by SECAM with the support of MISSIO, Aachen, Germany, and the Solidarity Fund of the United States Conference of Catholic Bishops (USCCB), two of the Partner Agencies of SECAM and hosted by the Association of the Member Episcopal Conferences of Eastern Africa (AMECEA).