Pope Francis commends Catechists in Uganda for their sacrifices

The Holy Father, Pope Francis on his first day in Kampala has lauded catechists for their invaluable role in promoting the evangelisation effort of the Church in Uganda. He said the catechists and teachers play an outstanding role in supporting your bishops and priests in carrying out the Gospel to people throughout Uganda, particularly in the remotest and difficult parts of the country. He particularly thanked them for teaching young children how to pray.” Your work is not easy. I encourage you and also ask your bishops and priests to support you in your work. Yours is holy work” he stressed.

The Pope made these remarks yesterday(November 27) evening at Munyonyo, near Kampala, Uganda, where King Mwanga made a decision to exterminate Christians. The first four of the martyrs of Uganda were killed here in May 1886 for refusing to abandon their Christian faith. These martyrs were also among the first catechists.

The Holy Father called on Christians to bear testimony of their faith to their fellow brothers and sisters. “The martyrs have shed their blood in sacrifice for their faith to grow in Uganda. They testified to the truth of the Gospel.” He concluded by asking the catechists and their children to pray for him.

This morning an Eucharistic Service was held in memory of the Anglican and Catholic Martyrs whose death the Pope said is a proof of the spirit of Ecumenism. The gift of the Holy Spirit, Pope Francis continued, is to be shared by all people like the Martyrs did even at the cost of their lives. He hoped that their exemplary life will be a testimony for every Christian in their family, work place, community and in the Church.

In a speech to welcome the Pope the Archbishop of Kampala, Most Rev. Cyprian Kizito Lwanga, explained that the Mass was the climax of the celebration of the 50th Anniversary of the canonization of the 22 Catholic Martyrs of Uganda which started in October last year.

He thanked the Holy Father for having honoured the invitation of the Episcopal Conference of Uganda to the celebration. Archbishop Lwanga also commended the Missionaries of Africa (White Fathers), for their great missionary work in Uganda. They were represented at this ceremony by their Superior General, Rev. Fr. Richard Baawobr.

Ugandan is the only country in Africa to have had three Popes pay apostolate visits in modern history. It will be recalled that the first modern Pope to have visited Africa was Blessed Pope Paul VI. He was in Kampala in July 1969; it was also during that historic Apostolic visit that the Symposium of Episcopal Conferences of Africa and Madagascar (SECAM) was founded in Kampala on July 29, 1969. Saint (Pope) John Paul II, the second Pope to have visited Uganda was in that country in February 1993.

To people of other faiths and non-believers his message is an invitation to draw closer to God and for the promotion of love, reconciliation and peace. Indeed the Pope’s messages seem to be resonating with the people wherever he goes.

The Central African Republic (CAR) is the third and last country of Pope Francis’ Apostolic visit to Africa.
The First Vice-President of SECAM, Bishop Louis Portella-Mbuyu of Kinkala in Congo Brazzavile, will represent SECAM during the Pope’s visit to CAR. 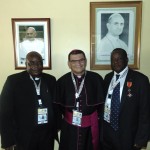 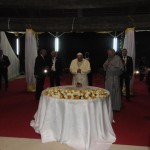