On the second day of his pastoral and State visit to Uganda Pope Francis had a lively and exciting encounter with about 200,000 Ugandan youth at Kololo Independence grounds in Kampala yesterday- November 28. The Holy Father addressing them emphasized the role of young people as the future and hope of Uganda, and for that matter the entire world, if well educated and gainfully employed.

The Pope declared Africa a “Land of Hope” and urged the continent’s leaders to invest in young population and use the abundant natural resources to benefit both present and future generations.

He, in turn, advised the youth not to be carried away by excessive love for material things and new ideologies.He urged them not to dwell on the negatives but rather on the positive values of life.

The 266th Pontiff of the Catholic Church let it be known that his six-day visit to Kenya, Uganda and Central African Republic (CAR) was to draw world-wide attention to Africa- its hopes, promise, challenges and achievements.

During a meeting with the Clergy and Religious of Uganda in the Cathedral of St. Mary in Lubago in Kampala, Pope Francis presented them a written message and made an extempore speech. He asked them to be reminded about the cause for which the Martyrs of Uganda shed their blood; “the Martyrs have shed their blood for you. Therefore be new witnesses and messengers of Christ, otherwise you will lose the meaning of your Vocation and thus be relegated to the background or to a museum….”, he said. He further appealed to the clergy and religious not to live “double lives” but rather be people of memory, prayer, fidelity and evangelisers.

The Holy Father requested dioceses that are well endowed with many priests to share them with dioceses that lack enough priests. “Be Missionaries to yourselves in Uganda” he added.

Uganda has 1,562 diocesan priests; over 7,000 members of the about 70 Institutions of Religious Men and Women and about 15 million Catholics representing nearly half of the country’s population.

The Pope, before meeting the Clergy and Religious of Uganda, visited the Nalukolongo Home for the sick, aged, and needy. The Home which was founded in 1978 by the late Cardinal Emmanuel Kiwanuka Nsubuga, hosts people of different faiths. It is under the care of the Good Samaritan Sisters. Pope Francis prayed for the inmates and thanked the Church for the good work it is doing by caring for those in dire need.

In another occasion during his visit the Holy Father lauded Uganda for opening its doors with compassion to receive refugees and allowing them to lead their lives in security and dignity.

In addressing the Pope the Archbishop of Kampala, Most Rev. Cyprian Kizito Lwanga, informed him that the Government has declared June 3rd of every year a Public Holiday in Uganda in memory of the Martyrs of Uganda. Blessed Pope Paul VI canonized 22 catholic Martyrs of Uganda at St, Peter’s Basilica, Vatican City on October 18, 1964. They will killed by the King of Buganda, Kabaka Mwanga for refusing to denounce their Christian faith.

In honour of the Holy Father’s visit, a road leading to the Munyonyo Martyrs Shrine has been named after him- Pope Francis’ Road.

Yesterday, before the Eucharistic Service to mark the climax of the celebration of the 50th Anniversary of the canonization of the 22 Catholic Martyrs of Uganda which started in October last year, Pope Francis unveiled and blessed a new Museum built in memory of the 23 Anglican Martyrs of Uganda who were also executed by the King Mwanga in th 19th century. He was received by the Primate of the Anglican Church in Kampala, Archbishop Stanley Ntagali. Outside the Museum, the Holy Father unveiled a plaque for the Shrine, now turned into a museum.

Ugandans in expressing their great joy for the Pope’s visit were also very happy to see their President shake hands with his main political opponent, Dr. Kizza Besigye, during the Mass in Namugongo. That was the first time in about two decades that the two have come that close publicly. “ This is one of the signs of the many blessings that the Pope has brought to our country, even during this period when there are heated political campaigns for Presidential and Legislative elections to be held in February next year,” commented a young Uganda with a broad smile.

In the afternoon, the Pope had a closed-door session with the Bishops of the Uganda Episcopal Conference (UEC). He also granted private audience to King Kabaka Roland Muwenda Mutebi II at the Residence of the Archbishop of Kampala.

The Holy Father left Kampala this morning for CAR on the third and last leg of his visit to Africa. He was seen off by the President of Uganda, Mr. Yoweri Museveni, his wife, members of the Judiciary, Legislature and other Government officials. Also present were the Catholic bishops of Uganda, the Apostolic Nuncio to Uganda, Archbishop Michel A. Blume and the Local Organising Committee of the Pope’ Visit to Uganda.
The Pope’s message for his historic visit to Africa has always been an invitation to all people of goodwill to draw closer to God and for the promotion of love, reconciliation and peace.

There were delegations from the Symposium of the Episcopal Conferences of Africa and Madagascar (SECAM); the Association of Member Episcopal Conferences of Eastern Africa (AMECEA), two representatives of Sant Egido Community in Rome. The following countries were also present: Burundi, Rwanda, Democratic Republic of Congo, Tanzania, South Sudan, Australia, Italy, Germany, etc.

The First Vice-President of SECAM, Bishop Louis Portella-Mbuyu of Kinkala in Congo Brazzavile, will represent SECAM during the Pope’s visit to CAR. 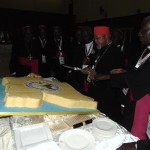 Cardinal B. Souraphiel, President of AMECEA being assisted by Cardinal Laurent Monsengwo of DRC and other bishops to cut the Golden Jubilee Cake at Pope Paul VI Memorial Hotel, Kampala at a dinner hosted by the Ugandan Episcopal Conference 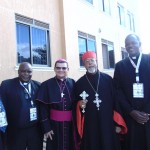 Cardinal Souraphiel (second right) Chairman of AMECEA d with Most. Rev. Ramaroson (third from left) head of SECAM’s delegation. On the right is Fr. F. Lugonzo, Sec. General of AMECEA; Second right is Fr. J. Komakoma, Sec. Gen. of SECAM; on the left is Benedict Assorow 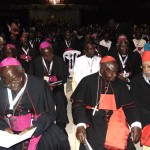 Story and photos by Benedict Assorow, Director of Communications, SECAM.