Ugandans awaiting the arrival of Pope Francis with Great Excitement

The Catholic Church and the people of Uganda are making finishing touches to preparation for the arrival of Pope Francis, tomorrow- November 27. Everywhere in the Capital city, Kampala and Entebbe, there are many clean-up exercises and the display of Vatican and Ugandan flags along the principal streets from the main airport to the heart of the twin cities.

Aside from the Papal visit, one striking thing is that many political parties and individuals candidates seeking election as Presidential or Parliamentary are vying for space in the media as political campaigns are heating up ahead of elections in February next year-2016.

Commenting on the Pope’s visit, Rev. Fr. Godfrey Kalule, Managing Director of Pope Paul VI Memorial Hotel in Kampala, said Ugandans are looking forward to the Pope’s visit with excitement and hoped that the visit will leave a strong legacy of faith in Uganda. “This visit will renew us in our faith, and also provide an impetus for us to live as brothers and sisters or as one Family of God. This visit will further cement religious tolerance and peaceful co-existence in our country.” he added.

Speaking to the media, recently, the Anglican Archbishop of Kampala, Stanley Ntagali, had this to say about the Pope’s visit – “ He is a man of the people, a down-to-earth pontiff, who has the holistic concern of the people at heart. I hope he transforms the Church significantly. I call on all Ugandans, irrespective of their religious or political affiliations, to give Pope Francis the welcome that he deserves.”

Many Ugandans are proud that their country is the only one in Africa to have had three Popes pay them apostolate visits in the last four decades. It will be recalled that the first Pope, in modern history, to have visited Africa was Blessed Pope Paul VI. He was in Kampala in July 1969; it was also during that historic Apostolic visit that the Symposium of Episcopal Conferences of Africa and Madagascar (SECAM) was founded in Kampala on July 29, 1969. Saint (Pope) John Paul II was the second Pope to have visited Uganda, in February 1993.

It is expected that the Pope will have about the same message(s) for the people of Uganda as he did in Kenya, the first stop of his apostolic visit to Africa. The Pope has been emphasizing the need for political and religious leaders who are straight forward and ready to serve with humility, love, prayer and care for the environment as has been amply stated in his latest Encyclical: Laudato Si. In his book: The Francis Miracle, John Allen outlines the Pope’s concern for the poor and the environment as the bedrock of his papacy.

To the clergy, Pope Francis asks them to identify with the joy and sufferings of their people. “ A good shepherd must smell the sheep.” The Pope is living to this dictum by going out into the world in bringing hope to the aged, sick, the poor, the marginalized, etc. through his apostolic visits. He is certainly inspiring and encouraging those who have abandon the Church to return, “home”, to the Church. To people of other faiths and non-believers his message is an invitation to draw closer to God and for the promotion of love, reconciliation and peace. Indeed the Pope’s messages seem to be resonating with the people wherever he goes.

While the Papal visits seem to be boosting tourism, at least for Kenya and Uganda; the same cannot be said about the Central African Republic (CAR) giving the serious political and civil upheaval they are facing. CAR is the third and last country of Pope Francis’ Apostolic visit to Africa.

The First Vice-President of SECAM, Bishop Louis Portella-Mbuyu of Kinkala in Congo Brazzavile, will represent SECAM during the Pope’s visit to CAR. In Uganda, Archbishop Benjamin Ramaroson of Madagascar and member of SECAM’s Standing Committee will represent SECAM. He will be accompanied by Rev. Fr. Joseph Komakoma, Secretary General of SECAM. The Director of Communications of SECAM, Benedict Assorow, will provide media service for SECAM.

Another member of the SECAM Standing Committee of SECAM in Kampala for the Papal visit is Most Rev. Smaradge Mbonyintege. However, he is heading a delegation from his country, Rwanda, as President of his Conference. 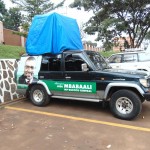 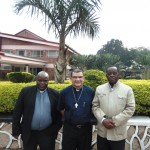