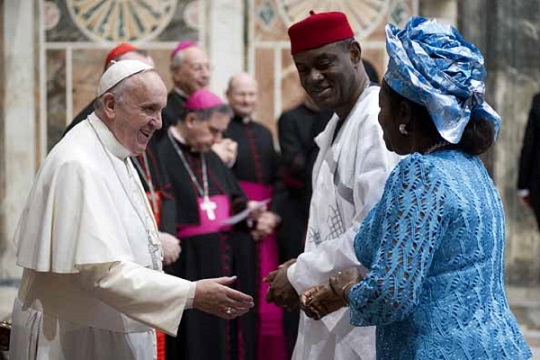 Pope Francis Monday revealed that the number of ambassadors accredited to the Holy See has grown.

In his annual address to members of the Diplomatic Corps accredited to the Holy See, it also emerged that in the course of last year, the number of African countries that signed or ratified bilateral Agreements with the Holy See had increased.

In his annual address to the diplomats, Pope Francis named the Democratic Republic of Congo, Central African Republic and Benin as African countries that signed or ratified agreements aimed at recognising the Catholic Church’s juridical status, last year.

Speaking to Pope Francis on behalf of the Diplomatic Corps accredited to the Holy See, the Dean, His Excellency Armindo Fernandes do Espírito Santo Vieira, of Angola, thanked the Holy Father for his concrete steps in reducing suffering in the word as evidenced during the Jubilee Year of Mercy.

The ambassador thanked the Pope for his leadership in encouraging peace; his stand on migration, social change and the climate.

“Despite many efforts, we feel sad because certain tragedies (in the world) highlight our inability to prevent them. The attacks in Germany, Bangladesh, Belgium, Burkina Faso, Egypt, the United States, France, Jordan, Nigeria, Pakistan, Tunisia, Turkey and many other countries; The suffering of the civilian population in Afghanistan, Iraq, Libya, the Democratic Republic of Congo, South Sudan, Syria and Yemen reveal that the road to peace is still a long way off,” Ambassador Armindo said.