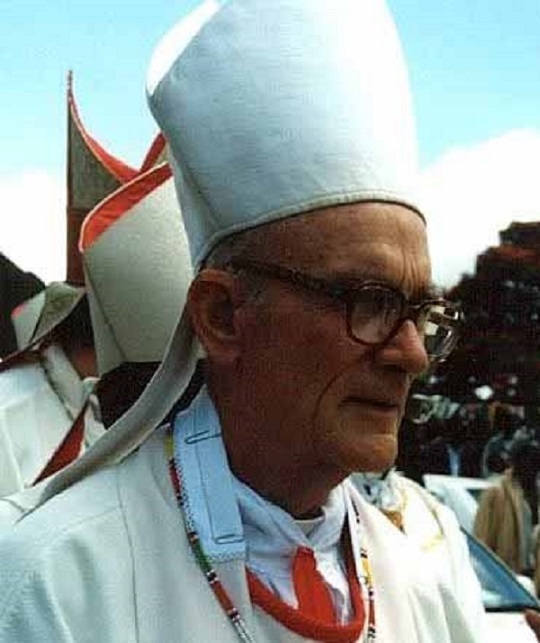 Just two days after the announcement of the death of Bishop Colin Davies, Bishop emeritus of Ngong Diocese in Kenya, the Bishops in Kenya are appealing for dialogue after President Uhuru Kenyatta signed into law the Election Amendment Act of 2016 despite spirited objection from the opposition and civil society.

“It is with sadness that we inform you of the death in Freshfield at 19.45 hrs on Sunday, 8th January 2017, aged 92, of bishop Colin Davies mhm after a long illness,” reads a message posted on a Mill Hill Missionaries website.

Ordained to the priesthood in July 1952, the late Colin was appointed to head the Apostolic Prefecture of Ngong in 1964 and later ordained the first Bishop of Ngong diocese in February 1977 where he served till his retirement.

“In 2002 Colin celebrated his Golden Jubilee as a priest and Silver Jubilee as a Bishop and during the year his resignation as Bishop was finally accepted,” part of his obituary reads.

In an interview with Waumini Communications, the local ordinary of Ngong diocese, Bishop John Obala Owaa described the late Bishop Davies as “a great pastor who served God and his people with a lot of dedication and simplicity.”

“He spent half of his years in Ngong diocese and therefore initiated many projects and ordained most of the priests that are serving in the diocese,” Bishop Obala has been quoted as saying, adding that his diocese continues to build on the foundations that the late Bishop Colin laid.

The late Bishop, also an accomplished pilot, authored two books by Paulines Publications: “Mission to the Maasai” and “From Pilot to Pastoral Bishop.”

Recalling his experience with the late Bishop Colin, the founder of the Social Communications department of the Association of Member Episcopal Conferences in Eastern Africa (AMECEA), Father Joseph Healey has acknowledged Colin’s hospitality and inspirational thoughts.

“In the 1970s when I needed a weekend break from the busy activities of the AMECEA Bishops’ Office in Nairobi, Kenya, Bishop Davies would invite me to his Ngong Residence,” Father Healey, a member of the Maryknoll Society has recalled, adding, “I would walk the Ngong Hills and then have English high tea and a pleasant conversation with the bishop.”

“In his final years in Nairobi, Kenya we had long conversations on the future of the Catholic Church,” Father Healey has recollected in a message he availed to CANAA Monday, January 9.

“I was inspired by Bishop Davies’ prophetic vision of the option of married priests in the Roman Rite for ‘pressing pastoral reasons,’” Father Healey continued in his message and added, “He wrote a challenging article: ‘A Call to Action on Eucharistic Hunger – Now! Making the Eucharist Available to All Baptized People as the Bread of Eternal Life.’”

Bishop Obala of Ngong diocese is organizing a requiem mass for the late Bishop Colin at St. Joseph the Worker Cathedral of Ngong diocese and has invited the clergy, religious, and the lay faithful to the Friday, January 20 event.

The requiem mass in Kenya’s Ngong diocese will coincide with Bishop Colin’s burial ceremony at a private cemetery in London (England), which will be preceded by the reception of his body at Herbert House, with Evening Prayer on Thursday, January 19.

While the Church in Kenya mourns the late Bishop Colin, the Catholic bishops in Kenya are making a “passionate appeal” for dialogue in the face of tension over the signing into law the Election Amendment Act of 2016.

In a press statement dated January 10, which was signed by the Chairman of the Kenya Conference of Catholic Bishops (KCCB), Bishop Philip Anyolo, the Bishops appealed to “all stakeholders to do everything possible to ensure a peaceful and credible forthcoming 2017 elections.”

Addressing the opposition leaders who have been calling for public demonstrations, the Bishops stated, “We sincerely believe that demonstrations and mass action should give way to this process of dialogue.

In the press statement, the Bishops offer themselves “to mediate and facilitate this process of dialogue in conjunction with other religious leaders and other people of good will.”