East Congo Bishops on Spiraling Violence: “We refuse to die” 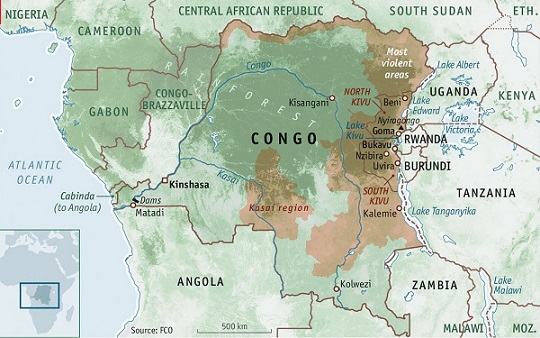 East Congo Bishops on Spiraling Violence: “We refuse to die”

Bishops in the east of the Democratic Republic of Congo have warned that ongoing violence could lead to the “institutionalization of a spirit of tribalism, division and exclusion, based on the same logic as that of secession.”

The bishops issued the warning at the end of the Ordinary Session of the Provincial Episcopal Conference of Bukavu (ASSEPB) held in Goma in the DRC May 14-20.

“In North Kivu, a certain political tendency is pushing towards fragmentation and the splitting of the province, on the basis of particular interests, disregarding the will of the population hoping for the unity of North Kivu,” the bishops of the Bukavu ecclesiastical province said.

For decades, North Kivu has been embroiled in insecurity as dozens of armed groups jostle for control over the region’s enormous mineral resources, and, in so doing, have been attempting to wrest the territory from the rest of the country.

The bishops worry that the fighting could degenerate into ethnic divides, a scenario that could transform the DR Congo into another South Sudan.

“There is a danger of provoking inter-ethnic rivalry: violence, ethnic cleansing and crimes against humanity,” they said.

“This dynamic could also bring us to the threshold of violence and atrocities that we recently experienced here and elsewhere: in the territory of Beni, in lturi, in northern Katanga, in Kasai, as still today, in South Sudan,” they wrote.

The bishops said the fighting over mineral wealth is worsened by the absence of state authority.

“The deficit in state authority has been known for decades, and it is worsening: the country is badly governed, creating an economic, social and political climate that favors the balkanization of the country,” the bishops said.

An institutional crisis at the helm of the state, the bishops warned, creates “insecurity, which ranges from the theft of the common good for selfish ends to programmed political violence.” In turn, that violence engenders the recruitment of young people into the myriad militia groups.

The “institutional crisis” to which the bishops refer stems from DRC President Joseph Kabila’s refusal to step down when his term of office expired in December 2016.

The bishops complained that insecurity offers the perfect recipe for the entrenchment of poverty and drives a rural exodus, leading to “unplanned urbanization that comes along with pauperization and promiscuity,” in the words of the president of the Episcopal Conference of Bukavu, Archbishop François-Xavier Maroy.

The bishops said the country’s economy is organized in a way that ends up benefiting foreign companies. Saying the country’s mineral wealth is simply stolen, they also took issue with rising taxes on home-produced goods.

“Surcharges on homemade products discourage local firms and asphyxiate the national economy to the benefit of foreign companies,” they said. “Meanwhile, road infrastructure is degrading everywhere, leading to a hike in prices, and rising poverty levels in the population.”

They lashed out at the country’s leaders for using poorly-drafted laws to sell off Congo’s minerals to foreign companies, thereby “auctioning” the country’s resources.

A call for more political engagement

The DRC is supposed to go to the polls on December 23 to choose a new leader. The bishops expressed doubt about the likelihood of keeping that deadline, in view of the worsening situation in the country. Nevertheless, they called on the population to get actively involved in the political process, saying it’s what good Christians are called to do.

Noting that the country was face to face with its destiny in “this decisive moment of general elections,” the bishops said the people are faced with a political class predisposed to “steal our resources, and mismanage our common heritage through compromises with foreign predators who deprive and asphyxiate us. Let’s stay vigilant and bar the way to their obscure plans.”

“We call on you to engage in constructive democratic dialogue and efficient political engagement,” the bishops said.

They called on the Justice and Peace Commission of the country’s dioceses to help “our Christian and local communities in the ongoing electoral process in the areas of a democratic culture as well as in the analysis, management and resolution of local conflicts.”

‘We refuse to die’

In apparent reference to rising animosity between Church and state in the DRC, the bishops said they will continue to articulate the views they believe are right and just in the eyes of God and the Congolese people.

“We refuse to die,” they said. “We must free ourselves from the fear of death, because Christ conquered death. Let us foster the Christian values of freedom and sacrifice and remain vigilant in prayer.”

They said they were ready to pay even the supreme sacrifice, if need be, citing some of their peers who had fallen in pursuit of the truth in the DRC, namely Archbishops Christophe Munzihirwa and Emmanuel Kataliko, as well as Floribert Bwana Chui of the Community of Sant’Egidio.