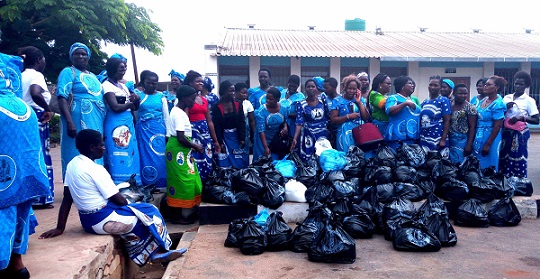 Catholic Women from Mtima Woyera and Maula Deaneries in the Archdiocese of Lilongwe on Saturday and Sunday last week respectively donated assorted items including sugar, soap and salt to inmates at Maula Prison and Patients admitted at Kamuzu Central Hospital as part of their activity to celebrate with the sick and those in prison during this festive season.

Speaking after making the donation, Chairlady for Lilongwe Archdiocese’s Catholic Women under the banner, Catholic Women Organisation (CWO), Anita Kaliu said the gesture is their normal practice as they do the same every year during the same period.

She said as women who care for their Children and family need to demonstrate some sense of love to those suffering hence the initiative.

“As women, we need to demonstrate love and share with others. As we celebrate the coming of Jesus Christ, we ought to celebrate along with the needy and those that need our love. God loves them all and need to love them as well and the only way to show them love is by visiting them at some point,” said Kaliu.

Kaliu said through their unity as Catholic Women, each member in all the two deaneries contributed a little something towards the initiative.

“Like for instance, Maula Deanery has eight Parishes and each member each member under CWO contributed such that our contributions reached up to over a Million Kwacha and we were able to buy all these items you have seen. Mtima Woyera also did the same and they donated to Maula Prison,” she said.

One member, Clara Gadi said through CWO gatherings, women are able to share brilliant ideas which are crucial to the socio-economic growth of the country and the Church as a whole.

Another member, Dr. Mary Shaba hinted on the need for those that are blessed with a little something to share with the poor and vulnerable.

“All what we must realise is that God is the one who put us into various position. Our positions or responsibilities are nothing before God because he is the one who blessed us, therefore it is important as Christians to thank God by sharing with others. You may recall that this was the Year of Mercy as we are called upon to be Merciful to others hence the gesture,” said Dr. Shaba who is also the Principal Secretary in the Ministry of Gender, Children, Disability and Social Welfare.

On their visit to Maula Prison, Chairlady for Mtima Woyera Deanery, Prudence Kadiwa said it was interesting to note that inmates were happy to see their mothers who were in happy faces taking their time off to share gifts with them.

“We are very excited actually to see that Catholic Women have spared their time to visit us. Here in Prison we face a lot of problems and for one outside this Prison to come and cheers us, it’s something commendable. We don’t take this gesture for granted,” said one inmate who asked for an anonymity.

“You may wish to know that as a hospital we do provide food only to patients but sometimes it happens that a patient travels all the way from Salima which is far away from Lilongwe and when coming, they do come with a guardian or guardians. Therefore, the items given by well-wishers help a lot to cover the gap,” she said.

Chinkhata challenged other well-wishers to emulate the gesture as demonstrated by the Catholic Women Organisation.