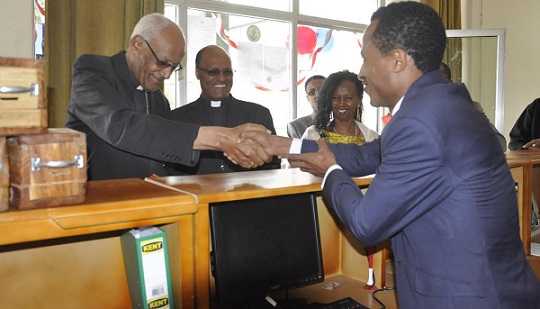 The new extension was officially inaugurated on July 3 by Bishop Tsgaye Keneni, Apostolic Vicar of Soddo in the presence of Zonal and district officials and ECS Secretary General Fr. Hagos Hayish, as well as other board members of the institution.

Speaking on the occasion, Bishop Tsegaye said that Metemamen is an institution established by the Catholic Church to give an opportunity to people with good entrepreneurial skills and ideas but lack financial capacity to manifest and develop through loans and other financial schemes.

“With Metemamen the Church does not give the society financial donation but an opportunity to the poor to bring their God given talents out onto the table and work with it. Many skills and innovative ideas remain hidden under the carpet because of low financial capacities and because poor people are not able to get loans due to their low financial status; thus the poor are forced to remain poor in spite of being born with the same capacity as any other human being that has been able to grow their ideas into big business,” the Apostolic Vicar said.

He explained that by working together both Metemamen and the people in the Apostolic Vicariate of Soddo can grow tremendously saying “it is only if we take a leap together that we can all benefit from this Micro Finance Institution that was established by the Catholic Church with the intention of bringing the poor on the same level as those with financial capacity, Metemamen will need the support of government offices and other stakeholders in order to reach its goals.”

The Bishop also recalled that Metemamen MF was established by the Catholic Church with the support of CRS while he was still serving as the secretary General of ECS and he is pleased to see it reach this stage and finally come to his Vicariate.

Speaking for his part Mr. Ufo Bonga, head of Wolayta Zone Finance and Economy Bureau, he appreciated all the initiatives the Catholic Church takes in the Zone to ensure integral development of the people, he particularly praised the skills and supports the Church provides the youth and women in rural areas by encouraging saving and alternative means of income. He added that now that the Church has come to the Zone with a Micro Finance institute he is hopeful that it will also be a good opportunity for his office to ensure sustainability of some of the projects of the government and other organizations.

According to Mrs. Wogayehu Asrat, General Manager of the Micro Finance Institute, it has entered in the Wolayta Zone with one branch in Soddo but plans to expand towards the districts to ensure their accessibility to the people in the rural areas. She expressed her hope that all Dioceses, Catholic Church Religious Congregations and Catholic Church Institutions will continue to support Metemanen Micro Finance Institute and help it grow to a level of a bank that works for the development of the people.