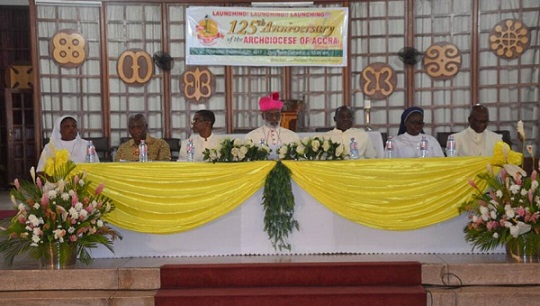 The Metropolitan Archbishop of Accra, Ghana, Charles Palmer-Buckle has launched the 125th Anniversary of the Catholic Mission in Accra with a call on all Catholics to fully participate in the celebrations with fervent prayers and supplication to God.

Archbishop Palmer-Buckle presided over the launch last Thursday, September 21, at the Holy Spirit cathedral in Accra, where he announced the three goals that will guide the celebrations: spiritual growth in Christ and the development of all Catholics; correct knowledge and intellectual appreciation of the Catholic faith and doctrines; and the spirit of fellowship and communion among the Church members, Church societies, parishes and in the Archdiocese, as well as with the universal Church.

The year-long celebrations, which are set to officially start on the eve of the first Sunday of Advent on Saturday, December 2 and conclude on the Solemnity of Christ the King on Sunday, November 25, 2018, are to take place under the theme: 125 Years of Catholic Mission in Accra: Renewing Our Commitment to Evangelization.

At the launch, the Archbishop inaugurated the members of the Planning Committee and Sub-committees who would co-ordinate the activities of the celebrations and emphasized the need for the celebrations to involve all Catholics in the Archdiocese in all Outstations and Parish communities, Church Societies and Pious Associations, Apostolates and Ministries.

“We are going to have celebrations on deanery and Archdiocesan levels. Parishes and Deaneries are to put in place their own local organising Committees to work hand in hand with the Archdiocesan 125th Anniversary Planning Committee,” Archbishop explained.

Ten youth of the Archdiocese who participated in the Anniversary Logo competition were recognized during the lauch.

Enumerating the activities for the celebration, the Archbishop noted that it will be officially opened with Rosary pilgrimages and processions by Deaneries from vantage points to the Holy Spirit Cathedral, Accra, for the First Advent Vespers on Saturday December 2, 2017.

He said the official Parish opening of the Anniversary will be on Sunday, December 3, 2017 while the whole of December will be dedicated to Children as God’s gift to the Archdiocese.

Welcoming the over 1,500 Priests, Religious and lay faithful, Very Rev. Francis Adoboli, Vicar General of Accra and Chairman of the Anniversary Planning Committee said the celebrations would involve a lot of spiritual activities including a Candle-Light Procession to Sacred Heart Parish, Derby Avenue, which is the first church in Accra Archdiocese after the commemorative Mass on January 31, 2018.

The Catholic Church in Accra began with the first Holy Mass on the soil of Accra on January 31, 1893, by Father Otto Hilberer and Father Eugene Raes, two priests of the Society of African Missions (SMA) who were sent from the Elmina Mission that had started in 1880.