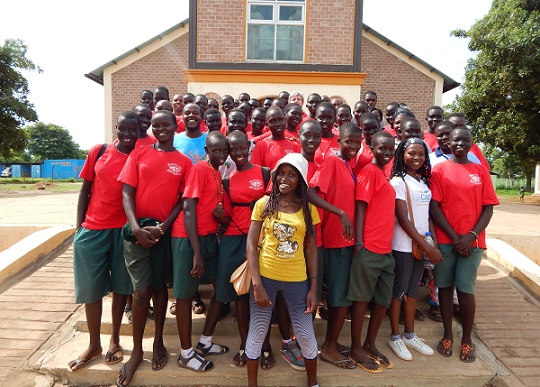 The fourth year students and staff at Loreto Girls Secondary School of the Catholic diocese of Rumbek, South Sudan, marked the sixth anniversary of the country’s independence by taking part in a pilgrimage of peace.

The walk of peace, which took place last Friday, July 7, saw the pilgrims walk in groups to Cueibet, a town located some 45km northwest of Rumbek.

South Sudan President, Salva Kiir decided to cancel official celebrations at the level of states, the third year in a row, because of the financial challenges the country seems to be facing occasioned by the ongoing protracted civil strife.

According to a report sent to CANAA, the Loreto pilgrims were split into three groups of about 15 people – fourth year students, teachers and administrators.

The pilgrimage began at 6:20 a.m. with a word of prayer from School Principal, Sr. Orla Treacy. She prayed for a safe journey and that the pilgrims have some quality time for reflection.

Sr. Orla then explained that a pilgrimage was an opportunity to meet people, for conversations and silences and encouraged the pilgrims to use the opportunity to pray for places where there is violence. She also asked them to think about the areas of their lives in which they need to seek peace.

Pilgrims were also encouraged to reflect on how they can bring peace to their lives and to the lives of others in their community.

The entire journey of 45km was split into nine legs, each team walking for 5km before passing on the baton to the next group, for a total of 15km. As one group walked, the others followed behind by car, handing out bottles of water and encouraging their friends to continue the peace pilgrimage.

As the pilgrims walked, they were met by curious children who laughingly joined in the “fun.”

Residents from the villages they passed through also encouraged and cheered the pilgrims.

In Cueibet town, the pilgrims were welcomed by the Korean Fidei Donum Priests who invited them for prayer in their newly built Church. There, they prayed together for South Sudan, reciting the Peace Prayer of Saint Francis to complete their pilgrimage.

“Peace, love, harmony. That is all [that I want],” one Senior 4 student, Jackie Nyankueth said prayerfully.

Before embarking on the drive back to Rumbek, the pilgrims visited the teacher training college and a clinic.

According to Sr. Orla, these visits were important to expose the fourth year students to options for work and training that would be available to them after graduation.

The administrative capacity builder at the Loreto school, Benjamin Sprunger, has told CANAA, “This sixth independence anniversary of South Sudan is a significant benchmark for the people and leaders of this country who are seeking peace in their homes, communities and the country at large.”

Explaining the value of the school to education of girls in South Sudan, Mr. Sprunger has said, “The Loreto Girls Secondary School has transformed to meet the growing needs and increased challenges of the young girls attempting to earn their education as a foundation for a bright future.”

“As part of the School’s comprehensive education program, the girls are provided with peace building skills and trauma healing strategies to help build resilience in conflict settings,” Mr. Sprunger went on to explain and added, “The girls themselves have become agents of peace and regularly facilitate outreach activities focused on peacemaking.”

“Upon graduating, Loreto students are empowered to serve their communities as this young country strives for development and peace,” Mr. Sprunger concluded.

The Loreto Girls Secondary School, which will mark its tenth anniversary in April 2018, started as a mission for girl child education in an extremely challenging local context rife with poverty, inequality, hunger, and conflict.

Candacia Greeman, one of the teachers at Loreto Girls School contributed to this story.