Catholic Leaders in Zimbabwe Call for a Peaceful Election 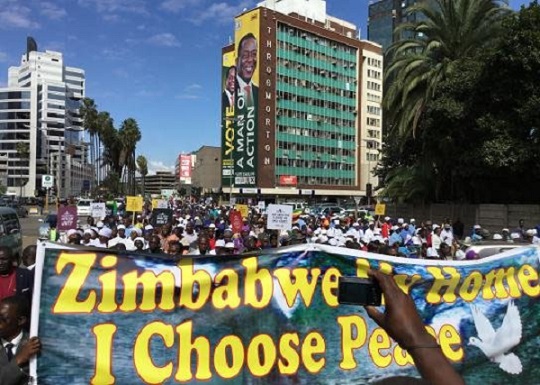 Catholic Leaders in Zimbabwe Call for a Peaceful Election

Zimbabwe will go to the polls on July 30 and for the first time in nearly four decades see a ballot that does not include the name Robert Mugabe.

President Emmerson Mnangagwa announced the election Wednesday on twitter, saying: “These elections will be free, fair and transparent, and the voice of the people will be heard. I call on all candidates to campaign peacefully and focus on the issues that really matter.”

Although the president determined the exact date of the elections, the constitution mandated that a poll take place at some point in 2018.

Mnangagwa was swept into office by the military last November, after Mugabe had dismissed the then-vice president in what was perceived as part of a plan to allow his unpopular wife, Grace, to succeed him in office.

The move by the 93-year old leader was a step too far for the military: Mnangagwa had been a key ally in Mugabe’s administration and was a leader in the struggle against white-rule in the 1970s.

Mugabe was unceremoniously removed from office after 37 years in power.

According to an April/May poll by Afrobarometer – a pan-African, non-partisan research network – the majority of Zimbabweans saw the military intervention as either “the right thing to do” or “wrong but necessary.”

Although most in the country cheered the change, the reality is that Mnangagwa has just replaced Mugabe atop the ruling ZANU-PF party.

Mnangagwa has already declared that his party will win the forthcoming election, saying that “we dictate what happens in this country.”

The opposition – united behind Nelson Chamisa, the head of the MDC-T – is hoping voters will be seeking real change in the country.

The opposition leader has promised a leaner government, more transparency and business-friendly laws.

Chamisa also pledged to re-engage the West, which has indicated that a free and fair election is a key step toward lifting sanctions imposed during the Mugabe years.

However, in a country which has a history of rigged elections and violence at the polls, the bishops’ main concern is with a fair and peaceful poll.

The Chairman of the Catholic Commission for Justice and Peace in Zimbabwe, Bishop Rudolf Nyandoro, has warned against the type of political rhetoric that can jeopardize the country’s peace.

“The behaviors and mannerisms we develop in politics, especially when we are sloganeering, remove the Christian life and values we purport to have,” he said.

“We have liked politics more than we have liked God, and therefore our brothers and sisters. In our political sloganeering, we have wished our political opponents dead. Literally, it would also mean wishing God dead since everybody was created in his image,” Nyandoro.

The bishop complained about political slogans which implied violence, even if innocently, such as “down with so-and-so,” saying they “mean a lot more than their face value.”

“My heart usually misses a beat when I hear them being shouted with all the energy and conviction,” added Nyandoro.

The bishop was speaking at an ecumenical gathering of the Zimbabwe Heads of Christian Denominations (ZHOCD) with the theme “Religious Leaders Supporting the Zimbabwe Peace Process.”

Paul Muchena, the national coordinator for the Catholic Commission for Justice and Peace also participated in the event.

“The main thrust is to enhance the Church’s participation in peace processes through such initiatives as dialogue, mediation, peace and reconciliation leading to national transformation with major highlights coming from the collaboration of Commissions such as the National Peace and Reconciliation Commission (NPRC), Zimbabwe Human Rights Commission (ZHRC), Zimbabwe Electoral Commission (ZEC) and the Zimbabwe Republic Police (ZRP),” he said.

The Catholic bishops have been preparing for elections even before the events of the past 8 months.

In their Pentecost 2017 pastoral letter, they called on Zimbabweans to “reject all forms of violence and coercion.”

“Violence and coercion only serve to discredit our elections. Any use of force takes away the credibility and integrity of the elections. People must be able to make free choices according to their own judgment,” the bishops wrote. “As we prepare for [the elections], let us respect each other and even mirror in our words and actions the love of God, Father of us all.”

According to the Afrobarometer poll, if the elections were held tomorrow, ZANU-PF would win with 42 percent of the vote, compared to 31 percent for the MDC-T.

However, the poll also showed a majority of Zimbabweans say the country is going in the wrong direction.