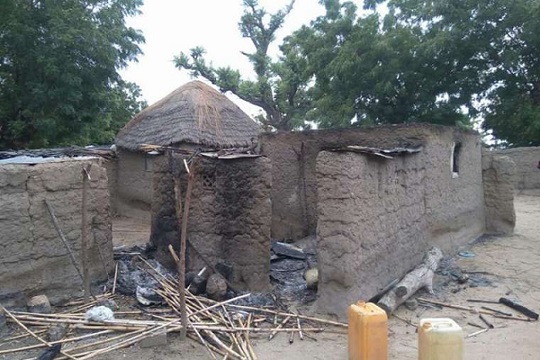 A Catholic catechetical building was damaged by Boko Haram militants during an attack Monday on a village in northwestern Nigeria.

Terrorists connected with the Islamist militant group burned 22 buildings during the raid, including part of the Catechetical Training Centre in Kaya, according to the Catholic Diocese of Maiduguri. Reportedly, the terrorists had been looting and searching for food.

The Diocese of Maiduguri reported that the catechetical center had been previously destroyed during a violent Boko Haram takeover of the region in 2014, and had only recently been rebuilt. Boko Haram militants have fought with government forces in the region since at least 2012.

Monday’s attack was stopped by Nigerian security forces and a group of locals from the Adamawa State. One member of Boko Haram was killed during the raid, Nigerian media reported.

Ahmad Sajoh, the Adamawa Commissioner of Information and Strategy, applauded the people’s resilience and asked the public to remain calm, according to Punch News.

“The current operations by the security agencies are intended to ensure enhanced security situation all over the state ahead of the end of Ramadan Sallah celebrations,” he said. “The general public is therefore requested to remain calm and be law-abiding.”

Archbishop Valerian Okeke of Onitsha, along with a committee of the Nigerian bishops’ conference,  issued a statement in May condemning Islamic violence in the country, following a conference for seminary rectors addressing “Christian Witness in the Face of Islamic Militancy.”

“The Church in Nigeria is passing through a very trying time more than ever before. The recent massacre of two Catholic priests and some parishioners during Holy Mass in Benue State and similar killings in other parts of the country strike deep note on the ears of the populace,” the statement said.

The conference condemned recent violence in the area, including attacks by Fulani herdsmen who massacred two priests and 16 parishioners in April.

Okeke’s statement said that poverty, unemployment, and a paucity of schools across Nigeria contribute to the rise of Islamic fundamentalism. The archbishop encouraged broad educational efforts by the country’s government and by the Church, and called for sustainable empowerment programs aimed at reducing unemployment.

“It is very important to see Islamic violence within the context of the historical evolution of the Nigerian State,” the statement said. “The Church and other noble agencies should continue to correct the distorted historical narrative of fundamentalist’s ideology which identifies colonialism and western civilization with Christianity.”

The statement encouraged Catholics to “work closely with peace-loving Muslims to tackle the problem of injustice that fuels fundamentalism.”

“Understanding fundamentalists groups, their ideologies and how to counter these ideologies should an integral part of seminary formation and general Christian formation;” Okeke added.

“Government should be held accountable for the life of every citizen irrespective of religion or ethnic group.”