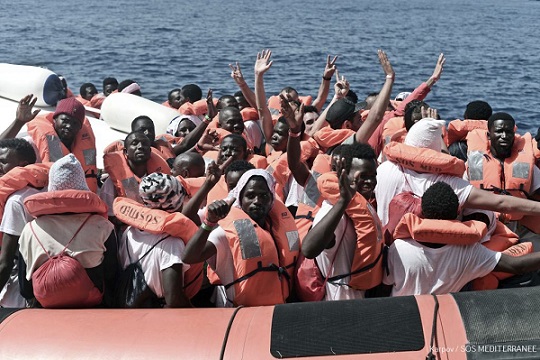 A rescue ship in the Mediterranean carrying 630 African migrants is on its way to Spain, where the Catholic Church in Valencia is coordinating rescue efforts. The quick response from Cardinal Antonio Cañizares and the faithful, after Italy and Malta on Tuesday refused to allow the ship to dock, also has “moved the pope.”

In a message sent to the entire archdiocese of Valencia, the cardinal referred to a private meeting he had with Pope Francis, who reportedly said: “You’ve moved me, your behavior [has moved me]. I congratulate you and thank the diocese of Valencia for the speediness and generosity with which you’ve reacted, [for] the example you’re giving of charity with these poor people.”

The pope welcomed Cañizares in the Vatican on Thursday, for a meeting that had been scheduled before the current crisis.

“This is the path, don’t ever abandon it: that of charity; remain steady in charity, in the good example, in the light and the good taste of charity and works of charity. The pope is with you, with the diocese of Valencia,” the cardinal said, conveying a message from Francis.

A son of immigrants himself, the pontiff is one of the world’s most outspoken leaders when it comes to addressing the crisis of migrants fleeing hunger, violence and persecution in Africa and coming to Europe. An estimated 37,000 refugees have arrived in Europe by sea so far in 2018.

The Aquarius is a rescue boat run by Doctors Without Borders. Over 600 immigrants and refugees were rescued on Saturday, but Italy and Malta refused to let the boat dock, in just another example of a growing intolerance in Italy towards helping migrants arriving by sea.

The decision was made by Italy’s ruling coalition of right-wing populists called the League, and the anti-establishment party Five Star Movement.

Spain responded to the Aquarius’s call for help and the boat is now on its way, with seven pregnant women on board and more than 120 children. It was confirmed on Tuesday that the ship would be allowed to dock in Valencia after what will be, at a minimum, a three-day trip.

After the NGO SOS Mediterranee announced Tuesday that the boat would not be able to make the trip with so many people on board, two vessels were sent by the Italian navy, and the three ships are travelling together.

On the same day, Cañizares created a special response team coordinating the Catholic charities, parishes and archdiocesan schools, putting them at the disposal of the authorities to collaborate in the welcoming of the migrants, as the archdiocese has been doing since the crisis began back in 2014.

The Church will help the migrants by answering to their basic needs and will also work in finding employment and helping with the education of their children.

In the statement released on Friday, Cañizares said that the Church is following with “true and passionate interest, amazement, stupor, compassion, pain and even shame, during these long and harrowing days [marking] the passage of 630 people through the Mediterranean.”

As Francis has done so many times before, the cardinal denounced that the Mediterranean is becoming an “anonymous grave,” one which is “insatiable,” swallowing “so many victims of injustice, of the selfishness of the powerful, of inhuman cruelty, of unspeakable bastard interests of mafias and of nations closed in on themselves.”

“The Aquarius, has been like a slap that has shaken our consciences and has put us on our feet to attend to those who knock at the door of the heart and the collective conscience of peoples and nations,” he said. “And they call upon people of good will, and above all they call upon the humanitarian and Christian conscience.”

After the migrants dock in Valencia, they will receive assistance and, eventually, be distributed across Spain. According to Cañizares, the local Church is ready to “welcome, help and tend to those who arrive,” with the archdiocesan community ready to act “guided only by its faith and Christian conscience.”

In these 630 people who’re arriving, “needing everything,” Cañizares said, the Church sees “the Lord himself, our true brothers with whom the Lord identifies; simply men, women and children who are imploring [for help] and who have needs and who must be welcomed.”

Quoting Francis, Cañizares said that the local Church is ready to “welcome, protect, promote and integrate the migrants and refugees,” and they’ve made this known to Spanish authorities.