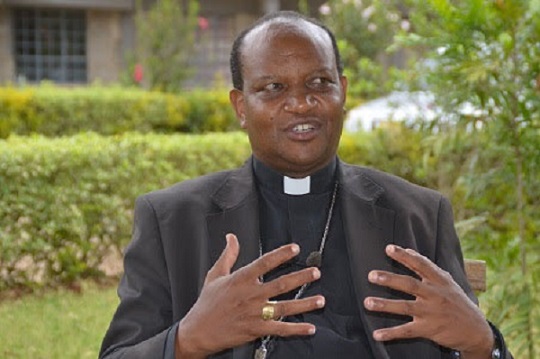 The news of Bishop Muheria’s promotion was contained in a letter from the Apostolic Nunciature in Kenya dated April 21.

“On behalf of the Apostolic Nuncio, I have the honour and pleasure to inform you that Pope Francis has appointed the Right Reverend Anthony Muheria, presently bishop of Kitui, as Archbishop of Nyeri,” reads the letter signed by Monsignor Marco Ganci, Chargé d’Affaire.

The confidential letter, which was addressed to the Archbishops and Bishops in Kenya further states, “The news of the appointment will be officially made public in Rome on Sunday, April 23, at noon (1:00 p.m. in Kenya) and is to remain confidential until that hour.”

Archbishop elect, a member of Opus Dei, will be taking over from Archbishop Peter Kairo, who will turn 76 on May 24. He retired last September after attaining the required age limit.

Archbishop elect who is also the Apostolic Administrator of Machakos diocese and has been a Bishop since January 2004, will turn 54 on May 27.

Before joining the Opus Dei, the Archbishop elect obtained a BC in Science and Civil Engineering at Nairobi University and worked for five years as a consultant engineer.

He was ordained a priest in June 1993 and served at the Opus Dei regional offices in Kenya, heading the education program as well as overseeing the human, professional, doctrinal and spiritual formation of Opus Dei members.

He served as Bishop of the Catholic diocese of Embu in Kenya before he was transferred to Kitui diocese in June 2008.