Press Release from the Communications Office of SECAM

Most Reverend Stephen Brislin, Archbishop of Cape Town, South Africa has appealed to his colleague Bishops in Africa to endeavour to get more of their priests trained as Exegetes or in Scripture and in other disciplines regarding the translation of the Bible. Archbishop Brislin made the appeal at the opening ceremony of a Workshop organised by the Biblical Apostolate Centre (BICAM) of the Symposium of Episcopal Conference of Africa and Madagascar (SECAM) that is taking place in Cape Town from March 13-19, 2016. 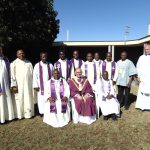 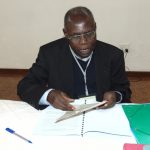 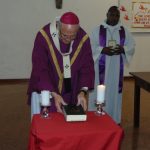 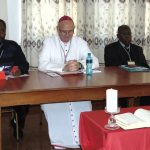 According to Archbishop Brislin, the Catholic Church in Africa has the responsibility and mission to bring the word of God to all people of goodwill. For this matter it was therefore very important to have Exegetes who could translate the Bible into the various languages of the communities that they serve.

“Africa has to meet the challenges of today by cooperating with other Christian faiths in translating the Bible for all language groups on our continent.” He stressed.

Earlier in a homily during a Eucharistic celebration, he condemned certain vices, such as corruption and greed that are militating against the development of Africa. He noted the widening of the gap between the rich and the poor even in the midst of plenty of resources that are more than enough for the need of every person on the continent of Africa. This, the Archbishop pointed out, is as a result of greed that makes some people to care less about those in need.

Archbishop Brislin also regretted that South Africa is still plagued by racism which he strongly believes can only be eradicated with a change of heart against this canker. “We should have the courage to speak the truth and fight against evil in society, defend the defenceless, the marginalised and those who are discriminated against. And may we use the Word of God to bring about healing, salvation and transformation in the world by making our light shine wherever we are and in whatever we do.” He added.

The Coordinator of the Workshop, Rev. Fr. Yves-Lucien Evaga-Ndjana who is also the Director of BICAM in his opening remarks expressed his sincere thanks and appreciation to Archbishop Brislin for his invaluable support and encouragement for the workshop.

He explained that the Workshop is divided into two parts:

The first part will be on the need to promote the translation of the Bible into local languages in Africa.

The second phase will look at the possibility of inserting Ad Experimentum the Biblical Apostolate in the curricula of Major Seminaries and Religious Formation Centres on our continent.

In his presentation on Challenges of Interconfessional Translation of the Bible, Rev. Msgr. W. Amewowo, first Director of BICAM, called for the use of more qualified Exegetes and other pastoral agents in translating the Bible. He bemoaned a situation where in most parts of Africa trained Exegetes are more often than not not engaged in what they were trained for.

He made reference to the Guidelines of Inter-confessional Cooperation in Translating the Bible published by the Vatican in 1968 and revised in 1987 and called on SECAM to form translation teams based on her three official languages to serve as Translators for the needs of the Catholic Church in Africa.

Other resource persons for the Workshop include: i) Bishop Anton Sipuka of Umthata, South Africa and member of the Standing Committee of SECAM; Bishop Matthew Madega, Moderator of the Catholic Biblical Federation and bishop of Mouila in Gabon; and iii) Dr. Fabian Dapila, an official of Bible translation group known as SEED Company.

The Workshop will end on March 19, 2016 with the adoption of resolutions and recommendations.

Issued by Benedict B. Assorow, Director of Communications, SECAM.