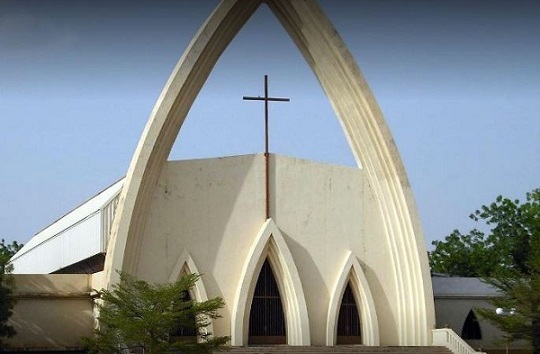 The Archdiocese of N’Djamena, Chad, is seeking thirteen million dollars to reconstruct their cathedral, which was damaged nearly 40 years ago during the country’s civil war. The archbishop first made the appeal at the end of June, when he went to the Vatican to receive his pallium on the feast of Sts. Peter and Paul.

Archbishop Edmond Goethbe Djitangar of N’Djamena, the capital of Chad, is hoping to be able to rebuild his cathedral, which was damaged in 1980 during the country’s 1979-1985 civil war.

Notre Dame de la Paix [Our Lady of Peace] Cathedral was originally dedicated under the title of “Our Lady of the Assumption.”

The 1979-1985 conflict followed Chad’s first civil war, which lasted from 1965 until the beginning of 1979. The short-lived peace was shattered when Transitional Government of National Unity failed to extend its authority throughout the country.

Like many nations along Africa’s Sahel region, Chad is predominantly Arab Muslim in the north, and Christian sub-Saharan African in the south, creating hard-to-resolve tensions. Muslims slightly outnumber Christians in the country, and neighboring nations – especially Libya – have often tried to interfere in its internal affairs.

The cathedral was bombed in 1980, but renovated and re-opened in 1986 under its new title, considered fitting after the end of hostilities.

However, the renovations had only papered-over the damage to the building, and soon the structure was considered unfit to host services.

In a letter sent to the “friends and partners of the Ndjamena Archdiocese,” Djitangar wondered “For how long will I be an archbishop without a cathedral?”

“Only God knows,” he answers, in apparent exasperation.

The archdiocese is seeking thirteen million dollars to reconstruct the building, and first made his appeal at the end of June, when he went to the Vatican to receive his pallium on the feast of Sts. Peter and Paul.

The Chadian government had pledged to provide the funds – as it promised to repair most of the damage of the decades-old conflict – but the global financial crisis, drop in the price of oil, and yet another civil war taking place from 2005-2010 drained the treasury coffers.

“We have started explaining to the different Christian communities that it is not the role of the state to construct a cathedral, because we are in a secular state,” the archbishop wrote in his letter.

“The state, by its goodwill, or by the obligation to repair the damage caused by the war, decided to help us rehabilitate our cathedral. We cannot cross our arms to wait for the finishing of a hypothetical cathedral,” Djitangar continued.

He said a commission has already been put in place to study the formalities of raising funds for the project, concentrating on local Christians and Chadian Christians living in the diaspora. He is also seeking help from religious communities working in the country.

However, given the poverty of the inhabitants, that will not be enough.

“The Archbishop will take upon himself the responsibility of using Roman Catholic institutions to contact all Catholic churches in Europe, America, Asia and Africa as well as institutions of the Universal Church to see how they can help us reconstruct our Cathedral,” he wrote.

Situated just a few yards away from the Malik Fayçal Mosque, the archbishop believes the cathedral symbolizes a secular state “in which all religions can co-exist peacefully.” He says the history of the cathedral itself is symbolic of the socio-political and social evolution of Chad.

Djitangar said the initial cathedral had integrated a modern version of the Massai and Musgum huts of the continent, “because Chad is a melting pot of nations, cultures and religions.”

Even the changing nomenclature of the cathedral is symbolic of the evolution of the Catholic Church in Chad.

At the beginning, Fort-Lamy (now N’djamena) was a “central mission” in a territory that was still to be evangelized. But in 1942, a group of French officers led by then-Colonel Philippe Leclerc de Hauteclocque decided it was time to construct a church dedicated to “Our Lady of Victories.” Djitangar said the name signified “the state of belligerence at the time.”

But with the Second World War, Leclerc (who had become General and then Marshall) went back to France, along with his contingent, and the project was suspended.

A local committee was then formed to build a church in Fort-Lamy, but this effort, too, failed to get off the ground.

In 1951, Jesuit Father Joseph Joseph du Bouchet (then the Apostolic Prefect of Fort-Lamy), would re-launch the project to construct a Cathedral to be called “Our Lady of the Assumption,” but he died just a few years later.

In 1958, the archdiocese of Fort Lamy was created with another Jesuit, Paul-Pierre-Yves Dalmais, being appointed the first archbishop.

He finally built the cathedral, which was consecrated on March 28, 1965, under the title, Our Lady of the Assumption. Djitangar said that name signified “the crowning of evangelization in the country.”

But then Chad descended into 20 years of nearly constant civil war. The bombing of the cathedral in 1980 brought down its timber and tile roof.

At the end of the civil war, the new archbishop of N’djamena, Charles Vandame, started collecting funds to restore the cathedral, and it was re-dedicated on December 6, 1986, under its present title “Our Lady of Peace.”

Although the restorations were insufficient, Djitangar said this new name is still symbolic.

“It is highly significant in a region battered by bloody conflict,” the current archbishop said. “The main facade of the Cathedral invokes an image of two hands put together in prayer to implore God to bring peace to Chad.”

Djitangar said if this restoration project is accomplished, it will mean a page has been turned on the painful memories of war, and it would symbolize a new era of peace; “consolidating it through the fervent prayers that will rise from this place of worship towards The Lord, by the intercession of the Blessed Virgin Mary, His Mother; our Mother.”