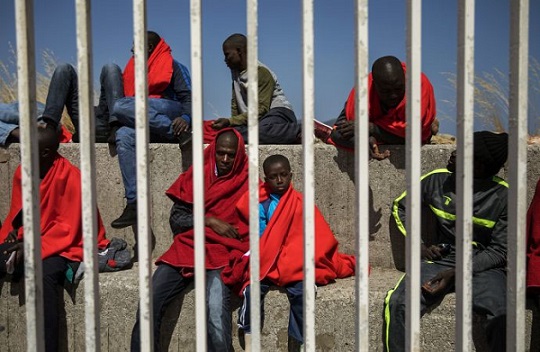 While U.S. bishops rallied at the border with Mexico in a show of support for immigrants and in opposition to President Donald Trump’s controversial “zero tolerance” policy that’s led to the separation of children from their families, Italian bishops also held their ground against a new, strongly anti-immigrant government.

When Matteo Salvini, minister of the interior and leader of the right-wing populist party Northern League, prohibited ports from accepting immigrants into the country, the Church in Italy was among the loudest voices objecting.

“It’s Jesus coming to us on a vessel, it’s him we see in the man or child who dies drowning, it’s Jesus who looks through the garbage in search of a little food,” said Cardinal Francesco Montenegro, archbishop of the southern Italian town of Agrigento on July 1.

The cardinal’s remarks were the latest of a flurry of comments objecting to the Italian government’s new stance on immigration. The last straw was Aquarius, a vessel carrying over 600 immigrants that was denied entry into Italy and Malta last month and was instead forced to travel to Spain to find a secure port.

Since then, other ships carrying asylum seekers have been sent away from the Italian coasts, and Salvini has promised that the crackdown will continue until traffickers give up.

But the Italian Church, which had been silent for the past few years as the country faced a period of political uncertainty, has issued repeated and forceful calls to the government to open Italian ports and hearts to immigrants.

“It’s a society but unfortunately also a religion that dismisses human rights, that creates the poor and then doesn’t want them because they are a bother and lets them die,” Montenegro said during his homily celebrating the feast of Saint Calogerus last Sunday.

“Immigrants, the poor, are a thermometer for our faith,” he continued. “Not welcoming them, especially closing our hearts to them, means not to believe in God.”

Salvini has made no effort to hide his being inspired by Trump, refashioning his phrases with the motto “Italians first” and adopting policies on immigration that are geared toward ensuring border security. But many Italian bishops and cardinals are not buying it, insisting that there is no difference between an Italian citizen and an immigrant.

Italy, with rampant unemployment rates and a staggering debt to GDP ratio, has been left with a handful of other south European countries to carry most of the load concerning immigrant flows into the continent. Salvini’s hope is to present an uncompromising front that would force Europe’s hand in modifying the laws that regulate immigrant distribution among member states, in particular the 2013 Dublin Regulations.

So far, the populist leader’s political calculus has not led to significant results during the European summits that took place last week despite the rise of populist sentiment on the continent. However, German Chancellor Angela Merkel has recently capitulated to issuing stronger policies against immigration, and French President Emmanuel Macron has been considering harsher detentions for undocumented immigrants.

In Italy, the Church’s staunch defense of immigrants has sometimes led to outrage on the part of many citizens who feel that migration flows pose a threat to safety and well-being in the country. While Montenegro was free to speak his mind in Church, the homily of another priest in Italy was not met with the same enthusiasm.

Many Massgoers left the parish, outraged by the priest’s remarks, and spoke to local news outlets about the need for the Church to stay out of politics.

“We are all equal, the Church says,” an elderly man told reporters. “But it’s not like that … first come the others, and then the Italians. I never voted for the [Nothern] League but during the next elections I will do so gladly, because now it’s time to think about the Italians.”

“It’s a shame that a parish priest does politics in Church during Holy Mass,” said another angered woman. “He should have just said that we need to help our neighbor and that’s it, what’s the point of calling out Salvini?”

The leader of the Northern League is currently the most trusted politician in Italy, a recent poll shows. According to a study for the Italian daily Il Giorno, up to 56 percent of Italians trust him, placing him comfortably above his competitors.

The fact that Salvini enjoys the support of over half the country does not seem to weaken the resolve of Italian clergy, which continues to voice its opposition, from high-ranking cardinals to the Franciscans in Assisi.

“It’s true that we cannot solve complex issues such as immigration and poverty but as Christians we have a duty toward compassion, one of the most beautiful names for charity,” Montenegro said, concluding his homily.