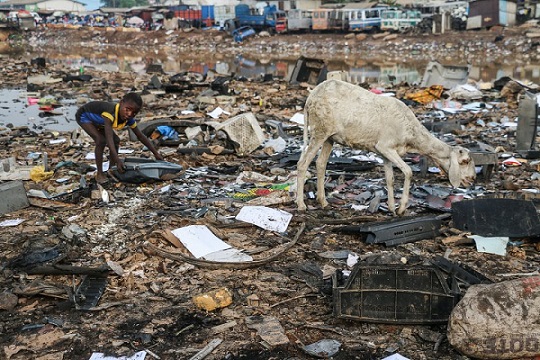 We are often led to think that questions surrounding the environment, waste and pollution are a problem for wealthy nations and large multinational corporations. In this piece, Togolese Jesuit Jean Amegble interrogates this myth showing that although developed nations may have much for which to account, the problem of waste is a problem created by all people, even the poorest.

When I was last in Togo, I travelled to the interior from the city’s capital, Lomé. The journey left me shocked and disappointed as I witnessed the careless attitudes and thoughtless actions of my fellow travellers towards the environment. I watched as passengers bought packets of corn and groundnuts to snack on and when they finished threw the empty plastic bags out of the bus.

What shocked me was the normalcy with which they appeared to litter. There didn’t seem to be any second thought or remorse. Actually, it seemed that they acted quite deliberately, unconcerned of the potential harm that was being caused.

Perhaps, more serious than the act of littering, is the inability to comprehend or even to willfully disregard the detrimental impact that such insensitive collective behaviours have on nature. My concern is that this wrongful attitude has become normal and we simply find a myriad of excuses to justify our actions, shifting the blame to absolve ourselves of any responsibilities. Some of the reasons we conjure up are that this is the responsibility of governments and that this is only a problem of and for the countries of the global North – because issues of environmental care and preservation are not a pressing concern for Africa.

But in fact, the neglect of the environment concerns all: rich and poor in the developed and the developing world.

In recent decades, global awareness of climate change and environmental issues have grown significantly. Melting glaciers and rapidly receding polar ice caps, torrential rains and subsequent destructive floods that result in a significant number of deaths. More recently, a pilot whale suffocated in southern Thailand after swallowing more than 80 plastic bags. The occurrence caught the attention of the world’s media generating much sympathy and righteous anger.

We’ve also had severe droughts in the northern parts of Kenya and in South Africa’s touristy destination, Cape Town. There have been deadly floods in Rwanda, Mali, Burkina Faso, Niger and Senegal. Last month, an entire Kenyan village was wiped from existence. At least 48 people were killed when a dam burst in the Great Rift Valley during unusually heavy seasonal rains. Some say this is Mother Nature’s revenge for the centuries-old harm that we have inflicted on her.

Despite the growth in awareness of air, water and soil pollution, only three countries in Africa are really taking drastic measures against non-degradable waste, especially tackling the use of plastic bags: Kenya, Rwanda and Morocco. In Kenya, where the production, sale and use of plastic bags is banned, you could be sentenced to four years in prison or a fine of up to 40,000 US dollars if caught.

However, in my own Togo, and in most of our African countries, countless open-air dumps are filled with a mixture of rubbish, including electronic, household, toxic and bio-hazardous items of waste. I still remember when in my high school years, I spent an entire month with my father and brother cleaning up the front of our house littered with plastic bags and glass bottles.

In Lomé, our people and especially the poorest among us, still litter right outside their houses. They dispose of their personal waste at night, clandestinely littering their streets which turns them into major dumping grounds.

The culture of using rubbish bins for waste is a painfully slow habit to instil, so much so that it seems a futile pursuit. But, for as long I can remember, during my childhood, my parents would punish us if we asked for plastic bags when buying groceries. They would tell us to take plates from home to “pack” what we bought. So, why has this carelessness taken such an uncontrollable hold now?

I often hear that the protection of our environment is a necessity and a challenge affecting developed countries, especially those on the North American and European continents. This is partly right. They are the big polluters. Their industries produce a disproportionate amount of waste.

According to the World Bank, sub-Saharan African countries produce only 5% of global waste. Whereas, the United States and Europe are producing more than 50% of our waste worldwide. Worse still, they are dumping their waste in African countries which is causing serious health problems and burdening Africans with all sorts of ailments and diseases. Though, it must be said, that Africans cannot be absolved of all responsibility for e-waste and have, themselves, still greatly to blame.

In Ghana, the biggest electronic waste (e-waste) dumpsite is the well-known Agbogbloshie, roughly a 20-acre scrapyard in the heart of Accra, the republic’s capital city. According to a 2017 report, The Global E-waste Monitor, 44.7-million metric tonnes of e-waste were generated in 2016 alone and only 20% of that was actually recycled responsibly. More frightening is that these statistics account only for documented e-waste which makes up a mere 20% of the global total of e-waste.

According to the United Nations Environment Programme (UNEP), e-waste dumped in Ghana and other parts of West Africa is in part due to the illegal imports of used electronic goods particularly from the wealthy Americas and Europe. Electronic companies often smuggle their unusable electronics into Africa. In 2009, nearly 215-thousand metric tonnes of electronics were smuggled into Ghana alone. It is necessary that the protection of the environment begin through the reinforcement of laws to prevent big and rich companies who are unscrupulously damaging the land and the health of the poor.

Sadly, today’s laws and policies are still designed to protect the rich more than the poor. Also, we rush and push to sign agreements and spend a lot of money holding and attending conferences, usually in exotic places, that try to address the burning issues around climate change. Nonetheless, the efforts of the international community, though laudable, are only ink on paper, and translate to little at best, nothing at worst. The concrete actions expected from these legislations seem endlessly stuck in the pangs of childbirth, awaiting their birth.

Returning to Lomé, especially in Agoè, the dumpsite grows rapidly and begins to encroach on people’s homes. The nauseating and health-compromising smells are driving people out of their own homes. Teachers are being forced to abandon their students in their classrooms as they escape gasping for fresh air.

The problem is bigger still. The open dumps often become the only source of income for the poorest people living nearby. They use the rubbish dump to find food, electronic items and other “recyclables” to sell. Given the precarious situation of the dumpsites, families often send their younger more agile members to clamber through the waste. This obviously raises all sorts of questions around the treatment of children – but they have little choice if they are to make a living.

Moreover, overall development in Africa could be stifled even further as future generations are compromised through the adverse effects of their unprotected rummaging, exposing them directly to toxic pollutants in the soil, water and as they breathe in the fumes of the burnt-waste. I believe that the protection of our earth is not a problem for future generations to deal with, as some might like to say, but a situation that could bring extinction to our current generation.

However, the picture is not entirely dark and bleak. Where governments are failing, women’s associations and other small community groups are doing their best to establish a new system of collection and transformation of plastic bags. The plastic bags, which were an instrument of death, are becoming the “black-gold” of vulnerable communities.

Early in 2010, Frenchman Walter Gauvrit and Togolese David Chateau-Gaitou, created an association called “Addel” in order to turn plastic bags into cobblestones. By mixing the melted plastic with sand, they created a new kind of paving tar suitable for road construction. 20kgs of waste is needed to make 5kgs of tar. In Bobo-Dioulasso, Burkina Faso, a women’s association GAFREH (Groupe d’Action des Femmes pour la Relance Economique du Houet), have been collecting plastic bags for the past 18 years in order to make clothes, backpacks, computer cases, saucers, necklaces and key-rings. The artefacts or items are sold across the country and give work to hundreds of women.

However, these associations only cover a small area for the collection of plastic bags. They often lack financial investments and where big investors have got involved they offer low wages for what is a grueling job. These associations are also struggling to survive, especially as many boycott their goods because they find them too expensive.

I beg a better understanding of our role as guardians of the environment. As guardians, we are called to carefully sort our waste, to think twice before wasting food, to boycott all plastic bags, to support small recycling associations by purchasing their goods and to promote the efforts of such associations in our communities. Through these small actions we can be of great help to humanity, now and for generations to come, and especially to the poorest in our midst.