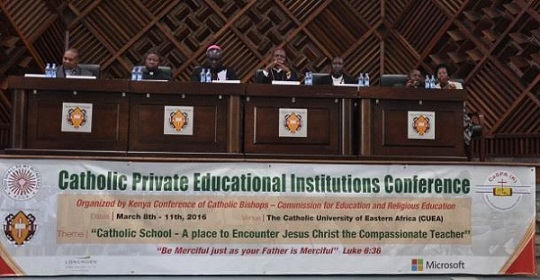 The four-day conference whose theme was “Catholic Schools, Hubs of Integrity” brought together more than four hundred delegates from different dioceses in Kenya including Garissa who attended the conference for the first time since its inception in 2015.

Held at the Catholic University of Eastern Africa (CUEA), representatives from the various dioceses were clustered into four metropolitans including Mombasa, Kisumu, Nyeri, and Nairobi.

The Kenya Conference of Catholic Bishops (KCCB) Chair, Bishop Philip Anyolo who officially opened the conference pointed out the need to inculcate and sustain values and ethos in Catholic Private and public sponsored institutions.

He said that the CaPEIA aims at bringing together learning institutions to share experiences and best practices, promoting Catholic tradition, improving and maintaining academic standards, promoting spiritual values and promoting mentorship programs to strengthen leadership in Catholic Schools in order to bring about the integral formation of individuals who will impact the society positively.

Bishop Anyolo added that the organization exists to address emerging issues in education including cultism, bullying, drug and substance abuse, exam integrity, digital learning among others. He also urged the delegates to be agents of peace within their institutions especially as the country approaches the general elections slated for August 8, 2017.

The KCCB Commission for Education and Religious Education Chair, Rt. Rev. Maurice Makumba Muhatia in his opening remarks applauded private and public catholic sponsored primary schools for their good performance in the 2016 KCPE and KCSE and urged them to remain united in facing the challenges that will always be there as one Catholic Church. He said that every catholic school is a place to encounter the living God who transforms the world in love and truth and so as stewards we should ensure that learners are prepared holistically for the service of the society regardless of their mental capability. He emphasized the need to promote catholic tradition in catholic schools and ensure that faith, culture and life are harmoniously integrated. He warned against corporal punishment, sexual abuse and bullying in catholic institutions which he regarded as acts against humanity. He reminded the delegates to show integrity in their instructional leadership, financial management and in their relationship with staff and students.

Kitui bishop and Administrator of Machakos, Rt. Rev. Anthony Muheria on his part asked the Catholic private school heads and principals to be models of integrity in their schools by inculcating virtues among their students and staff.

Speaking during the same CaPEIA conference, bishop Muheria referred to integrity as completeness. He called on school principals and heads to be models of integrity that is founded on the gospel values. Using the analogy of a skeleton which is essential for life, he referred to every student as a skeleton and urged the delegates to build the skeletons of their schools in order to bring about the integral formation of individuals.

In reference to a quote on catholic education by Saint John Paul II, bishop Muheria reiterated the mission of a catholic institution as the integral formation of their students so that they may be true to their position as Christian disciples and as such work effectively for the evangelization of culture.

He discouraged the habit of focusing on academic excellence for popularity and rather called on school principals and heads to focus on instilling the four cardinal virtues of prudence, temperance, fortitude and justice among their students.

“We have to work for what distinguishes us as Catholics, the main thrust why we are in education is to change hearts, to change attitudes, to give and empower people to do things that are transcended, people who can give their lives for a reason. Not just people who survive. Not just for professor but someone who has got something to die for,” he said.

He further condemned corruption and dishonesty in exams and urged the delegates to create a culture that inoculates the young people from immoral epidemic of lies.

He said that teachers are the hubs of integrity that should instill justice among their students by punishing evil without favoritism and that parents should work together with teachers to bring about integrity. He added that the school infrastructure, the dressing code of teachers and members of staff and the organization of offices and classrooms should reflect integrity that can be emulated by the students.

“Yes we have been doing it, we have shown it, it is in us, but let’s take time with the spirit of discernment to look at those values that are sometimes not spoken about. These days we want to achieve our goals, let’s have a vision, let’s have a school motto, but how much time do we give to these values that are so much needed in the society, that now we can see not being reflected in the people that are serving this nation? So it is a challenge, this is your opportunity. Seize the opportunity,” he told the delegates.

Other topics presented during the conference included Effective Learning and performance, Child nurturing and protection against abuse among others.

The CaPEIA brings together nursery schools, primary, high schools, and colleges run by the Catholic Church in Kenya and its mission is to incorporate gospel values in the leadership, management and instruction of Catholic Educational Institutions in Kenya.