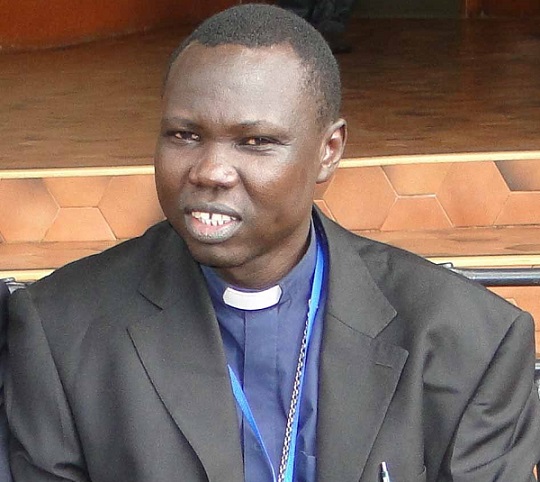 A top Roman Catholic bishop in South Sudan has decried the cause of war in the country, asserting that carelessness brings curse and suffering to the people. Santo Laku, auxiliary bishop of the Roman Catholic archdiocese of Juba told Christians during a homily after nearly a month of being out of church service that it was time for the leaders to stop spreading lies that there is peace in the country and that people are not suffering.

“There is no need to tell lies. Lies do not serve us. They do not help us. This country is getting down. We need to get up and stand strong and say God help us to carve a new way, rather than denying the suffering of the people.”

He continued: “We cannot deny the suffering of these people. How many young men and women are in prison today uncharged? People are locked in containers uncharged. This country can only be built on justice. When somebody commits anything, he should be brought in front of the law, according to the constitution, although our constitution is also sick with Malaria.”

His remarks come just days after South Sudan first Vice President, Taban Deng, addressed the general assembly of the United Nations at which he opposed deployment of the regional protection forces, claiming the country was peaceful and was only in need of humanitarian assistance instead of peacekeepers.

The outspoken bishop called on South Sudanese to share the blessing of the country rather than stealing the money for personal benefit.

He said the Lord called the people to share the blessing bestowed on humanity and leaders should uphold to the commandment of God giving the blessing for charity.

“Social charity is a direct demand of humans and Christian brotherhood and sisterhood. Human and Christian Brotherhood existed long time. God is demanding all from Human beings social Justice. Today there is wide spread disregard for the law of human solidarity and charity as we can see dictated by our common origin in the rationale nature of human beings. There is something very important in our life that makes us human,” he explained.

He said people of South Sudan like the people of Israel at the time of prophet Amos lack moral and religious responsibility causing death and displacement of thousands of residents all over the country.

“We were bestowed with a lot of resources when we came in 2005; we voted for independence, we had oil, resources which other countries do not have. What happened with these resources, many people are poor today or rich? Where is the oil money? Who has taken them? What is the money used for? If I ask these questions they say the bishop is talking politics.”

The bishop pointed that South Sudanese are suffering and fighting is ongoing due to what he called the carelessness of the country’s leadership.

The religious leader said South Sudan only measured its progress by personal economic prosperity and forgot the moral prosperity which he said is weak, causing unnecessary ongoing evil in the new nation.

“True health of the society cannot be measured merely by economic prosperity. We have seen it already. It must be assessed by the moral performance of the community of the nation. Our prosperity of having the oil was not enough. Our moral responsibility has been weak,” he pointed out.

“That is why we are able to rape women and children. We rape them our sisters, South Sudanese. This is a poor moral responsibility that we lost. We are able to kill our own brothers and sisters. Why?” he asked.

“Because of oil, because of money, because of resources. Who gave us those resources, God. We start dividing ourselves into ethnic lines, political lines and we start destroying our nation.”

He said justice in all forms is essential for a proper functioning of a society. “If there is no justice in a society, in a community, then there is no social harmony. No peace. Why we are fighting today, why there is war in the country today because there is injustice and this has to be ‘injustice in capital letters.’

The perpetrators of social injustice in South Sudan, he explained, confuse their time by hypocritical religious acts such as by attending religious functions so that the public looks at them as holy.

“Those who perpetrate injustice they always come to church. They sit in front line. They ask for choirs to go and sing in their family. They move with the bible, with the cross and you think they are men of God, ‘Welle!’ No!”

He said in South Sudan there is at highest level ongoing corruption, embezzlement, injustices, oppression of the poor, flight of the capital including the Bank reserves. This, he said, accounts for the country’s instability.

“Somebody has a Mansion, a building that is of multi-million dollars in South Sudan and a South Sudanese who has only a tukul, the tukul soldiers are sent to burn that tukul. So what kind of country is this? What is happening? The poor is even made poorer. He is deprived even of a grass house. The elite prosper educationally. They educate their family members at the expense of the nation. They build Mansions with stolen money. They pay unjust wages and continue the exploitation of the poor on day-to-day basis.”

He said people are paid low wages that do not even feed a single family member at the current market prices for a month. The economy, he said, is made to suit the interest of the rich who have houses all over in the world, saying those who remain in power leaving their population suffering in poverty should be condemned. He said some church leaders in South Sudan are afraid to tell the country leaders they are wrong but rather go to the palace to bless them.

“How many of our preachers today went to those palaces and blessed those corrupt leaders? How many of them? You become afraid to tell them that they’re wrong,” he said.

“And yet this religious leader cannot go to Yei by himself. In our country today the song of peace has been sung but the injustices have not been addressed. You cannot sing the song of peace without addressing the injustices caused on the people. How can you burn my tukul and you ask me to be peaceful and you do not allow me to go and cut the grass to build another tukul. How?”

In South Sudan people fear to keep silent when told to say Oyeee (SPLM slogan) just to protect their jobs.

Bishop Laku welcomed The Sentry report and said it is a shame to be millionaire among the poor.

“Is it not a shame somebody is a millionaire in South Sudan and there is a young boy, a young girl in the streets looking for one pound and cannot find it and nobody can give to that boy, to that girl that one pound. I want to be rich. I need to have houses everywhere. My children should be the only ones to go to school. The rest of the children, let them go to hell. No,” the bishop said.

The Holy Bishop Santo Laku asked South Sudanese to be merciful to each other as the only way to enjoy the country and to reduce quarrels among the communities.