Shrine in Memory of Blessed Irene Stefani Unveiled in Kenya 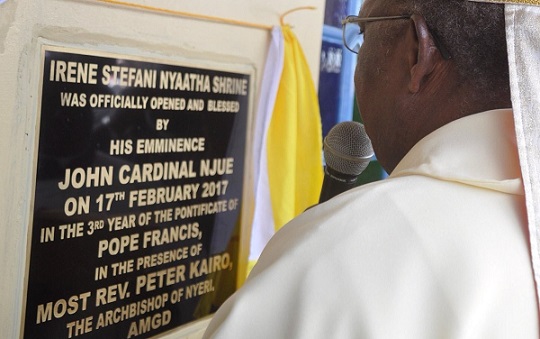 Shrine in Memory of Blessed Irene Stefani Unveiled in Kenya

A shrine in honor of Blessed Irene Stefani “Nyaatha” was officially unveiled last Friday, February 17 in the Catholic Archdiocese of Nyeri in Kenya.

Italian-born nun, Sister Irene Stefani arrived in Kenya in 1915 and served as a nurse, settling in Nyeri where she was nicknamed “Nyaatha”, which means “mother of mercy” in Kikuyu language.

Consisting of a chapel and an art gallery with chronological biography of Blessed Irene’s life history, the two-storey building shrine is located behind Our Lady of Providence Gikondi Parish, a mission where Sr. “Nyaatha,” a member of the Consolata Missionary Sisters, lived and worked.

The shrine has been built around the foundations of the house where Blessed Irene lived for a period of 10 years before her death.

The beatification of Blessed Irene Stefani took place on May 23, 2015 at Dedan Kimathi University of Technology in Nyeri, a ceremony that was officiated by Polycarp Cardinal Pengo of Dar es Salam, Tanzania, in his capacity as the Papal delegate for the beatification.

This was the first beatification on the Kenyan soil.

“Let the blessing of this shrine not be a formality,” Cardinal Njue said and added, “Let it be a house of prayer where you will go when you have joy, difficulties or challenges.”

Acknowledging the honor brought to Kenya with the beatification of Blessed Irene, Cardinal Njue further appreciated the services of the Consolata Missionaries in the country.

“They planted the seed and now it is our responsibility to water it and to weed it so that it can grow and produce more fruits,” Cardinal Njue said about the Consolata Missionaries in Nyeri, adding, “A heritage has been left and our challenge is to see how best that heritage can be bettered and left to those who will come later.”

He went on call on the Consolata Missionary Sisters to consider returning to the Catholic Archdiocese of Nyeri and specifically to Gikondi explaining that their services are still required there.

Meanwhile, the Regional Superior of the Consolata Missionary Sisters, Sr. Sarafina Sergi described the shrine as a physical sign of the presence of Blessed Irene among the people she loved and served.

“This shrine is a house of mercy, love and reconciliation and it should be a place where we come to pray not only for our needs but to entrust the hand of God to all the people and the needs of our county and the world,” Sr. Sergi said.

Cardinal Njue conducted the blessing rite in the presence of Archbishop Peter Kairo of Nyeri and Bishop Anthony Mukobo of Isiolo Vicariate.