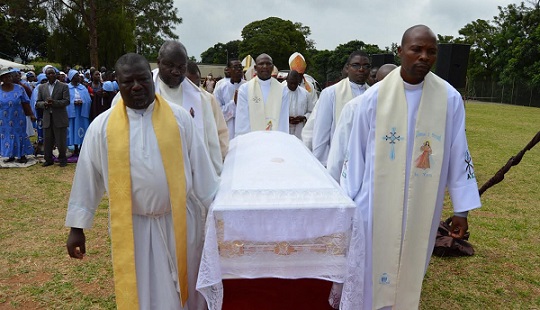 Auxiliary Bishop of Mutare, Patrick Mumbure Mutume has died at 74 after suffering from kidney problems for nine years.

The late bishop was buried at Triashill Cemetry some 60 km before the resort town of Nyanga. Bishop Mutume was known for his social justice activism that saw him being detained at Nyanga prison for defending human rights and advocating for majority rule in colonial Zimbabwe.

Thousands of people from all walks of life including Catholic Bishops, the Papal Nuncio to Zimbabwe Archbishop Marek Zalewski, politicians, members of other churches and civic groups thronged St. Dominic’s High School grounds in Mutare on 11 February 2017 to bid farewell to Bishop Mutume who was described by many as a man who was all things to all people and a true hero of the gospel.

The late Bishop Mutume was ordained Auxiliary Bishop of Mutare in 1979 at the time the late Bishop Donald Lamont was deported from the country because of his outspokenness against the injustices perpetrated by the colonial regime. So too Bishop Patrick Mutume could not compromise his faith and love for his country to the extent that he suffered until he saw Zimbabwe independent in 1980.

Speaker after speaker described Bishop Mutume as a priest who contributed to the life of Zimbabwe and deserved the status of a national hero. Bishop Xavier Munyongani spoke highly of the late Mutume that he worked to unite Catholics in the country through the formation of the Zimbabwe Catholic Council of the Laity, (ZCCL).

“Bishop Mutume toiled not only to establish political peace in the country but he also worked to unite all Catholics in Zimbabwe through the formation of ZCCL. By this, he wanted to show us the light of Christ and wanted all Christians to fight the devil through their faith,” said Bishop Munyongani. 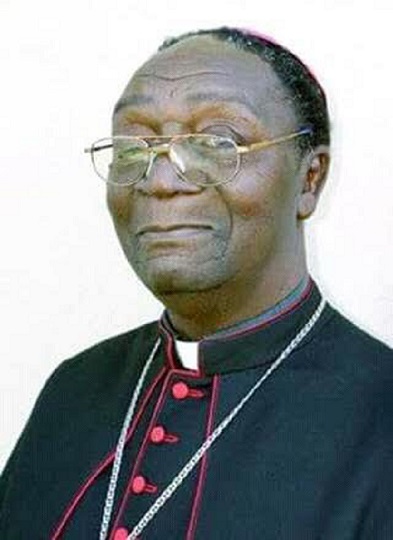 The late bishop’s political involvement did not end with the struggle for independence but spilled into the post-independence struggles and crisis leading to the formation of a government of national unity between the ruling party ZANU-PF and the Movement for Democratic Change in 2009 when he, together with others, mediated to bring the two warring parties together.

The retired Anglican Bishop, Sebastian Bakare described Mutume as a true man of God who was devoted to peace as witnessed by his courage to bring President Robert Mugabe and Morgan Tsvangirai to a roundtable and forge the way forward in curbing problems bedeviling the nation.

Bakare said: “Even on his death bed Mutume was involved and informed about happenings in the country. He was concerned why politicians in Zimbabwe were fanning violence at the expense of peace. He was a man committed to peace and tranquility.”

Zimbabwe Home Affairs Minister, Ignatius Chombo echoed the same sentiments that the late bishop was a peace maker who challenged the government to prioritize the process of peace and equality.

Bishop Mutume was born on 31 October 1943 and ordained to priesthood on 3 September 1972. He succumbed to kidney failure on 8 February 2017.