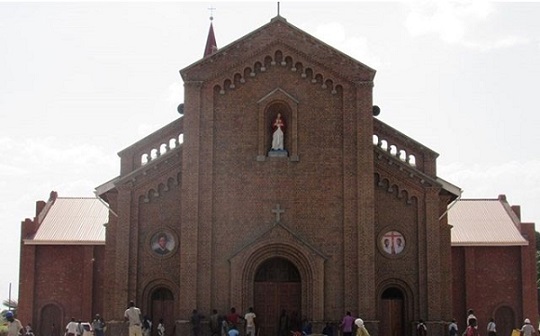 Thousands of the faithful from across Uganda recently thronged the refurbished Sacred Heart of Jesus Cathedral, Ediofe, in Uganda’s Arua Diocese for its re-dedication. The ceremony commemorating the Cathedral’s re-opening, re-dedication and consecration was officiated by Archbishop Vincenzo Paglia, President of the Pontifical Academy for Life and President of the St. John Paul II Pontifical Institute for Studies on Marriage and Family.

After seven years of work on the Cathedral, the faithful were welcomed amidst jubilation to witness the newly re-furbished Church, featuring blue and yellow stained glass windows, an altar restored with marble, a large crucifix with painted details and several pieces of artwork. The celebration was marked with a Holy Mass that was presided over by Archbishop Paglia and concelebrated by Uganda’s Archbishop Emeritus of Kampala, Emmanuel Cardinal Wamala; Archbishop August Blume, the Apostolic Nuncio to Uganda; Archbishop John Baptist Odama, of Gulu Archdiocese and Chairman of the Uganda Episcopal Conference.

Bishop Sabino Ocan Odoki, the Ordinary of Arua Diocese was the host. Several other bishops from various dioceses also attended the colourful event. There were also over 50 priests, deacons and religious sisters. In his homily, Archbishop Paglia said that to open the door of the Cathedral is a symbol of opening the depths of our hearts.

“To open the house of the Lord to the people, a house which is a place of prayer and encounter, is a great and beautiful event. In this world where too often doors and borders are closed, we instead are opening doors. This is what Jesus asks us to do: To open our hearts to our sisters and brothers especially the most poor and vulnerable so that no one is left alone and no one is left outside the mercy of God,” he said.

Archbishop Paglia also expressed his gratitude towards Bishop Odoki for his invitation to reopen and consecrate the Cathedral saying, “It is a great honour for me to participate at the celebration for the dedication of the Cathedral of Arua Diocese. It has been a work for many years requiring much commitment to renew and expand this Cathedral.”

Bishop Odoki in his speech urged the faithful to respectfully receive the Cathedral as a gift of God through which God’s blessings will flow through the Sacraments and Sacramentals. The bishop stressed that, in the Cathedral, the gift of life, Baptism, Confirmation, and other Sacraments would be administered. He further expressed his gratitude to Archbishop Paglia, the Apostolic Nuncio, the Cardinal, Archbishop Odama, other Bishops, priests and the faithful for their presence and contribution towards the renovation and the celebration of the re-opening of the Cathedral.

Archbishop Odama appealed to Christians and all humankind to love one another and cautioned the leaders in South Sudan to stop fighting and killing one another.

Meanwhile, some of the lay people present were close friends of Bishop Odoki, Larry and CeCe Carroll, who contributed significantly towards the completion of the Cathedral. They were presented with gifts of recognition and appreciation.