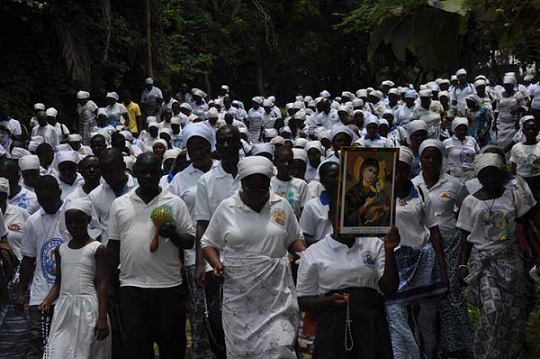 The national spiritual director of Our Mother of Perpetual Help Confraternity in Ghana, Rev. Msgr. Joseph Agoha, has called on Ghanaian Catholics not to hide their identity in public and instead give unambiguous witness to their faith wherever they are.

He lamented that Catholics are often afraid to make the sign of the cross in public places, while some shy away from praying the Angelus in public transport vehicles and offices, and that some even avoid hanging crucifixes in their homes and places of work.

During a three-day pilgrimage by about 600 devotees of the Confraternity to the St. Mary Sanctuary/Grotto at Buoho in the Konongo-Mampong Diocese, he asked the pilgrims to defend their identity, preserve it, and carry it forward.

The pilgrimage from September 23 to 25 was on the theme: Blessed are the Merciful for they Shall Obtain Mercy.

The Pilgrims were at the Grotto for spiritual enhancement and to introduce the Confraternity and the devotions to Our Mother of Perpetual Help to the Ashanti Region.

Msgr. Agoha said it behoved Catholics to be steadfast in their faith and defend themselves from all efforts to dilute their Catholic identity by non-Catholics.

He urged Catholics to take pride in the Cross of Jesus and devotions to the Blessed Virgin Mary which the Church professes and held in high esteem.

He advised the pilgrims to believe and live in the Cross, which was a sign of victory and be ready to carry the Cross to follow Jesus, calling on them to imbibe with the teachings of the Church and its practices so that they might not be swayed from them.

The Spiritual Director urged the pilgrims to always endeavour to have the crucifix in their homes and work places to proclaim the victory of the Cross, admonishing them to seek spiritual advice and counselling from Catholic Priests instead of charlatans, who would only extort from them.

He lamented that of late some Catholics rarely visited the confessional due to reasons known to them, entreating them not to avoid it since it was the place where sins were absolved.

During the Stations of the Cross, there was a rare phenomenon of the partial appearance of the Blessed Virgin Mary and the Blessed Sacrament in the dancing Sun, where the pilgrims lifted up their hands in prayer while others waved their handkerchiefs.

Msgr. Agoha explained to the pilgrims that the rare phenomenon was a call on Catholics to intensify their devotions to the Blessed Virgin Mary who would always interceded on behalf of mankind.

In a homily during the closing Mass on September 25, Msgr. Agoha lamented that the desire for material wealth had become the root of evil and had led many people to do evil, urging Christians not to allow wealth to become the source of temptation.

He advised them to avoid materialistic tendencies and entreated them to shun the tendency of accumulating wealth for themselves but be ready build treasures in Heaven and help the needy and underprivileged.

Rev. Fr. Gerard Kofi Massey, a Redemptorist Priest working in the Ho Diocese in Ghana, advised the pilgrims to stop chasing Pastors of other Churches and anointing oils for deliverance but rather intensify their prayers in the intercession of the Blessed Virgin Mary

The Confraternity is currently made up of Catholics from all ethnic groups from the Accra Archdiocese, Keta-Akatsi, Ho, and Koforidua Dioceses.

The Confraternity of Our Mother of Perpetual Help is one of the most well-known devotion to the Blessed Virgin Mary, Mother of our Lord Jesus Christ and is being promoted by Redemptorist Priests and lay faithful, seek to help others know and love the Mother of God and Her Divine Son Jesus Christ.

It was also established to spread the devotion to our Mother of Perpetual Help through participation in weekly prayer meeting, monthly novena, meetings, works of mercy (corporal and Spiritual), evangelization, conducting special events including Marian activities.