Continental celebration of Dei Verbum by BICAM in Kigali, Rwanda 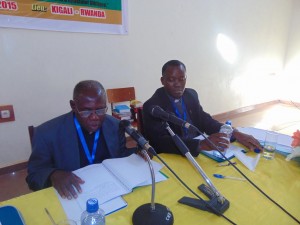 Referring to Dei Verbum nr. 45, Msgr. Amewowo, who is also celebrating 50years in the priesthood, said the all exegetes, theologians, pastors, promoters of Biblical Apostolate and the lay faithful should be encouraged to create “a closer working relationship” among themselves and to promote “greater communion in the service of the Word of God”

He made these observations in a presentation to participants at a continental celebration of the 50th Anniversary of the Promulgation of Vatican II Dogmatic Constitution on Divine Revelation, Dei Verbum, the Magna Carta of Biblical Apostolate. The celebration is taking place in Kigali, Rwanda from November 9-14, 2015. Msgr. Amewowo spoke on the topic: Exegesis and Biblical Apostolate: Dialogue Between Exegetes, Theologians, Pastors And Biblical Apostolate Facilitators.

Noting that the Church has made consistent progress and growth in the scientific, pastoral and liturgical study of the Bible, Msgr. Amewowo feels that more still has to be done regarding the role of various members of the Church in interpretation of the Scriptures. This he said, calls for enlightened access to the Scriptures by exegetes, theologians and pastors who must share the abundant wealth of the Divine Word with the faithful.

To this end he recommended the development of human resources for the service of the Word. “Every diocese in Africa must have at least one or two well trained, orientated, certified Catholic Biblical Exegetes and Biblical Theologians, who offer their learning as a service to the Church. Each diocese needs exegetes and trained ministers of the Word who put their knowledge, learning, expertise and skills in teaching and in the interpretation of Scripture to the service of the Church.”

Regarding the involvement of women, he said that in his experience of teaching Scriptures to students at Master’s level, he noted that women make good exegetes and the small number of women exegetes frequently contribute new and penetrating insights to the interpretation of Scripture and rediscover features which had been forgotten.

He hoped that prompt attention would be paid to the serious deficit of Biblical Exegetes and Biblical Theologians in the Major Seminaries, Catechetical or Pastoral Institutes etc.

He also called for the use of information and Communication Technology (ICT) in the spread of Biblical Education and Evangelization. “In the world of Globalization driven by ICT, publication goes beyond the print media with other more powerful and rapid means of communication – radio, television, internet and other electronic media. Publication in all its ancient and modern forms – print, audio, video etc. is one of the most important roles, task and tool for providing enlightened access of the Scriptures to the people. The exegete has the knowledge and tools to educate the faithful so that they do not fall prey to the preachers of another gospel. ” He added.

He urged the Pan-African Association of Biblical Exegetes (PACE – APECA) to contribute more to the understanding of the Word of God and to open the Bible to the Lay faithful and to support in the building of the Small Christian Communities (SCC) on the continent.

In conclusion Msgr. Amewowo noted that the numerous Biblical Apostolate programmes and activities in Africa must be prioritized according to the results of survey, evaluation and obvious needs. These he added should go with the required human, material and financial resources.

The Protestant Churches he noted were the first to translate the Bible into the local languages in Rwanda.
Msgr. Musegamna appealed for a National Biblical Commission in Rwanda.

Earlier in the day, Rev. Fr. Yves-Lucien Evaga Ndgana, Director of BICAM at meeting of Experts took them through the different stages of work on a project for the production of an African Edition of the French Liturgical Bible.