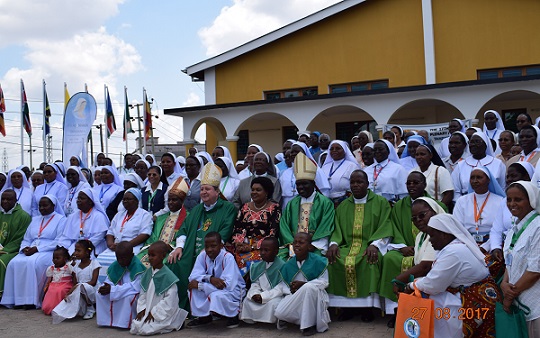 The Pope’s confidence is contained in his message to the ongoing ACWECA 17th Plenary meeting, in which he has said the women religious’ assembly is “an opportunity to rediscover the freshness of the Gospel, from which new avenues arise, new paths of creativity open up, with different forms of expression, more eloquent signs and words with new meaning for today’s world.”

Signed by Monsignor Paolo Borgia who is the Assessor for General Affairs of the Secretariat of State at the Vatican, Pope Francis’ message was addressed to ACWECA President, Sr. Prisca Mantenga and delivered by the Vatican Prefect of the Congregation for Institutes of Consecrated Life and Societies of Apostolic Life, João Cardinal Braz de Aviz, AMECEA Online Newsletter has reported.

In the message, Pope Francis has encouraged religious women in Eastern and Central Africa to establish and maintain bonds of communion among themselves as they reach out to the marginalized in society, including the sick and the poor, AMECEA Online Newsletter has reported.

The weeklong 17th Plenary Assembly of ACWECA, whose theme is “Revitalize Our Solidarity for Deeper Evangelization in Today’s Complex Reality within the Region” kicked off Saturday, August 26 and will conclude Saturday, September 2.

On his own part, Cardinal Bráz de Aviz has cautioned religious women in Eastern and Central Africa against the temptation to focus on money over the service of God and neighbour.

“Money commands everything today, money commands power, money creates the poor, money creates death, it creates arms, and it creates fear,” the Prefect of the Congregation for Institutes of Consecrated Life and Societies of Apostolic Life has been quoted as saying and advised, “We do not want to serve money, we want to serve God and put the money at the service of God and our brothers and sisters.”

“How often do Bishops and religious fight over money issues? Is it not true? That is how it is, we know it because we receive news of this fights; we therefore have to change,” AMECEA Online Newsletter has reported.

Meanwhile, in their solidarity message with ACWECA, the Association of Member Episcopal Conferences in Eastern Africa (AMECEA) acknowledged with appreciation the contribution of religious women in Eastern and Central Africa particularly “in the formation and education of children and youth, in alleviating the pain and suffering of many people and especially in the most rural areas” including their “contribution to the promotion of Gospel values (and) touching the lives of many.”

The plenary is being hosted by the Tanzania Episcopal Conference (TEC) at its Kurasini Centre in Dar es Salaam.

“The decision to hold the 17th ACWECA Plenary in Tanzania has been a blessing to this country,” TEC’s President has been quoted as saying through a speech read on his behalf by the Chairman of the Religious and consecrated persons in Tanzania, Bishop Renatus Nkwande.

In the speech, TEC Chairman has acknowledged the value of consecrated women globally, describing them as “precious in the Church and in the world.”

On its part, the government of the United Republic of Tanzania has recognized the positive impact of religious women in society “through their services to the community in schools, hospitals, social life etc. … bringing integral development of our people both spiritually and physically.” AMECEA Online Newsletter has reported.

The over 150 participants at the Plenary have come from nine member countries within the ACWECA region, including Eritrea, Ethiopia, Kenya, Malawi, Sudan, South Sudan, Tanzania, Uganda and Zambia.

ACWECA partners, among them, representatives from the United States Conference of Catholic Bishops (USCCB), the International Union of Superiors General, and the Conrad N. Hilton Foundation, are in attendance.