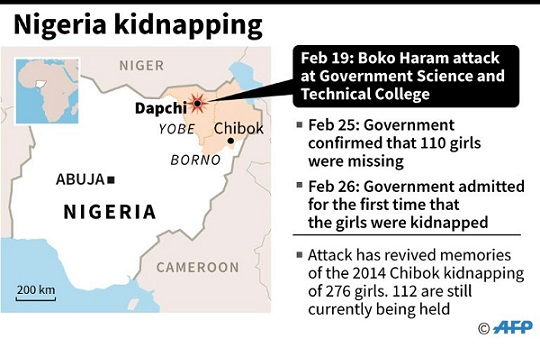 With 110 girls still missing after terrorist group Boko Haram attacked a technical college in Nigeria last week, a priest in the region says “deep sorrow has descended on the once sleepy…town.”

“Boko Haram militants have ravaged Northeast Nigeria and other strategic targets in the country in their bid to implant an Islamic state,” said Father Maurice Kwairanga, who coordinates the Justice, Development and Peace Commission (JDPC) for the Nigerian Diocese of Yola.

Corresponding with Catholic Relief Services, the priest said that this has left “many in this community…frustrated with no one to offer any support or explanations” in the wake of the most recent attack.

Based in northeastern Nigeria, Boko Haram launched an uprising in 2009 hoping to impose strict sharia law on Nigeria. It has been responsible for tens of thousands of deaths, targeting security forces, politicians, Christian minorities, and moderate Muslims in Nigeria’s predominantly Muslim north. In 2015, the group pledged allegiance to ISIS.

However, confidence in the government is “waning,” the priest said. He noted that many of the girls kidnapped from Chibok Government Secondary School in 2014 remain missing, despite the #Bring Back Our Girls campaign that garnered the world’s attention.

Boko Haram militants abducted 276 girls in that attack, and more than 100 are still missing.

Kwairanga said that many Nigerians have been disappointed by President Muhammadu Buhari’s response to the Boko Haram. The president took office in 2015, pledging to eradicate the terrorist group.

“Nigeria has a long way to go in ending insurgency,” continued Kwairanga. “The insurgents might have been kicked out of their base in the dreaded Sambisa Forest but they have employed new tactics like suicide bombings, kidnappings and violent abductions on soft targets.”

The group’s violence has expanded beyond Nigeria. Catholic Relief Services’ Nigeria representative, Rebecca Hallam, told CNA, “Although Nigeria is bearing the brunt of the crisis, Boko Haram has been launching violent attacks in Niger, Chad and Cameroon too — CRS is working in all four countries, where attacks have displaced millions of people.”

“In northeast Nigeria, Catholic Relief Services is helping meet the basic needs of those who have been forced to flee violence, and we’re supporting people so they can rebuild their lives and livelihoods. We’re providing vulnerable families with vouchers so they can purchase local food and household items, and we’re also providing shelters and improved sanitation and hygiene services,” Hallam continued.

Despite the tragedy Father Kwairanga’s community in Northeastern Nigeria has faced, the priest remains hopeful. “It is our prayer and hope that the Dapchi schoolgirls and the Chibok girls still in the hands of Boko Haram will one day return to the loving arms of their parents and loved ones.”

Pope Francis has assured Nigerians of his prayers. Earlier this week, the pope met with a Boko Haram abduction survivor in a private audience.

Nigerian Bishop Oliver Dashe Doeme has urged the world to pray the rosary to end the Boko Haram’s violence after saying he had a vision of Christ following the previous abduction of Chibok schoolgirls.