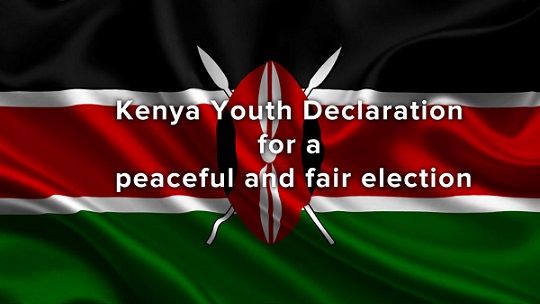 There is a mood of prayer in Kenya as the country nears the much anticipated and seemingly competitive general elections slated for next Tuesday, August 8, 2017.

Prayer rallies have been organized by various groups in different parts of the country, all with one running theme: peaceful elections.

On Friday, July 28, the Catholic Bishops announced a novena for all the faithful in Kenya.

“We invite all the faithful in our Dioceses and all people of good will, to join together in praying for our Country,” the Bishops said in a letter signed by Bishop Anyolo and added, “We propose to start the Prayer of the Novena for Peaceful Elections from 30th July to the 7th of August 2017.”

On Sunday, July 30, hundreds of Kenyans from all walks of life gathered at Nairobi’s Uhuru Park for a prayer rally organized by Tuombe Kenya Peace Movement and spearheaded by Rachel Ruto, the wife of the Deputy President William Ruto.

This countrywide prayer initiative has been so far to 40 counties. The Sunday Uhuru Park prayers were presided over by the Christian clergy as ‘a time of thanksgiving, repentance and supplication’ ahead of the slated for August 8.

The poll involves the election of six leaders, who include a President, County Governor, Senator, Member of Parliament, Woman Representative, and a Member of County Assembly.

The most recent opinion polls have indicated that it is a neck and neck between the incumbent, President Uhuru Kenyatta and the National Super Alliance (NASA) Presidential candidate, Raila Odinga who is vying for the fourth time.

The prayers for peaceful elections have intensified after the mysterious disappearance and shocking murder of Chris Msando, who was serving as the systems development manager at the Independent Electoral and Boundaries Commission (IEBC), the body responsible for delivering Kenya’s elections.

Msando is said to have played a significant role in the installation and management of digital technology, which will be used in voting and tallying election results. He was scheduled to oversee the testing of this results transmission system on Monday, July 31, the day his body was identified at Nairobi’s city mortuary, where it had been brought by police on Saturday, August 1.

A postmortem report on Wednesday, August 2, has revealed that the late ICT professional was tortured and strangled by his killers who also hit him with a blunt object in the head and inflicted a deep cut before dumping him in a forest in the outskirts of Nairobi city.

Msando’s back had also deep scratches, which seem to indicate that he was either dragged on a rough surface or scratched. His right hand also has deep cuts, an indication of some torture by a sharp object.

The United States and United Kingdom governments have indicated a willingness to provide a team of investigators to help in the probe of Msando’s death, a move strongly supported by Kenya’s opposition, NASA.

The Catholic Bishops have described Msando’s killing as a “barbaric action” and condoled the family and IEBC.

“This barbaric action has taken place when we as Catholic bishops and other religious leaders as well as our faithful have been dedicating this country to prayers to ensure there will be just, free, fair, credible and peaceful elections,” Bishop Philip Anyolo who heads Kenya Conference of Catholic Bishops (KCCB) has been quoted as saying on behalf of the Catholic Bishops in Kenya.

“Life is sacred and only God who gives it freely should take it away when He so desires,” said Bishop Anyolo.

In their July 28 letter, the Catholic Bishops called on “all Kenyans to seize this opportunity to exercise our constitutional right and give ourselves Leaders of integrity.”

Below is the full text of the letter by the Catholic Bishops in Kenya.

We the Kenya Conference of Catholic Bishops, meeting in Nairobi, wish to address all Kenyans as we prepare to exercise our democratic rights by casting votes to elect our Leaders.  We wish to note that the moment we have been waiting for is here. We are calling upon all Kenyans to seize this opportunity to exercise our constitutional right and give ourselves Leaders of integrity. The clarion call has been to have Just, Fair, Peaceful and Credible Elections. We need to create a peaceful environment, to demonstrate our patriotism for our wonderful Country, and ensure that all parts of Kenya are in peace.

We note with appreciation, the relatively peaceful manner in which campaigns have been conducted. We urge all the candidates to continue conducting themselves with decorum and sobriety in the remaining stretch of the campaigns, in order to achieve cohesion and National integration.

We appeal to the Youth to restrain themselves from violence and instead be the agents of peace. We exhort them to uphold to the culture of peace and engage in activities of peace-building.

As Catholic Bishops, we recognize the achievements so far made by the IEBC under the circumstances. We appeal to the entire Country to accord IEBC all the support it needs to discharge its constitutional mandate. On their part, we ask the IEBC to see to it that they secure Just, Fair, Transparent, Credible and Peaceful Elections.

We shall work closely with all the election observation groups, and all Agencies and non-State actors involved in the electoral process.

We recognize that the Media is a very crucial actor in the entire electoral process. It is the media that packages and relays information to the public. It is, therefore, important for the Media to remain objective in helping to create a peaceful environment and promote the culture of Justice, Peace and Reconciliation.

As we draw closer to the elections we urge the Security Agencies to intensify their preparedness in helping IEBC to secure Just, Transparent and Peaceful elections.

We recognize the manner in which the Judiciary has discharged their duties so far. We encourage it to continue upholding its professionalism and commitment to this Country in fulfilling its mandate without fear or favour.

In conclusion, we invite all the faithful in our Dioceses and all people of good will, to join together in praying for our Country. We propose to start the Prayer of the Novena for Peaceful Elections from 30th July to the 7th of August 2017.

We beseech God to take charge of the whole process of Elections.  “May the God of Peace be with you all, (Rom. 15:33).

God bless you all.   God bless our Country Kenya.