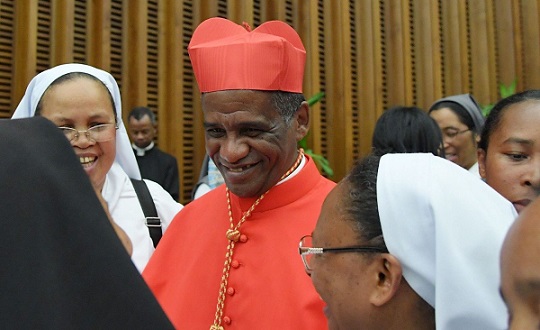 The Archbishop of Toamasina, Désiré Tsarahazana, one of the Cardinals created by Pope Francis on Thursday, says he is cognizant of the responsibility that is now his own in Madagascar.

The self-effacing new Cardinal of Madagascar has said his appointment as Cardinal came to him as a total surprise.

“I had just made my pastoral visit where I administered the Sacrament of Confirmation to 165 people. I was ready to take a good nap because I was tired. Someone called me from the (capital city) Antananarivo, informing and congratulating me on my new appointment as Cardinal,” he says.

His first reaction was that perhaps there was some misunderstanding. Then came several other phone calls, which prompted him to call the Apostolic Nuncio to Madagascar to seek clarification. Eventually, when the Nuncio got back to him, he confirmed the new appointment from the Holy Father. The night of the appointment was a sleepless one for Cardinal Tsarahazana. Looking back, he says the support of the people coupled with their joy comforted him. “And here I am for the Consistory!”

A responsibility that goes beyond the confines of the Church

The Archbishop of Toamasina was surprised that after his appointment, Catholics, people from different religious denominations, political parties, congratulated him but also expressed to him their concern for the future of the country. It then dawned on him that his new appointment carries with it, a responsibility that goes beyond the confines of the Catholic Church.

It is mission to give hope to the people

“I feel a mission has been thrust upon me to comfort the people of Madagascar so that they have a little more hope in the future. People expect a lot from me. I wonder how I will respond to all their expectations, all these many desires,” said Cardinal Tsarahazana.

The new Cardinal is convinced that the Church must continue to be a voice for the poor and voiceless because the country’s politicians have misgoverned the nation for years. He says the Bishops will continue to raise concerns regarding the country’s socio-economic welfare, without necessarily being involved in the politics of the country.

Appointment is recognition for the people Madagascar

Cardinal Tsarahazana says that above all, his appointment is a significant recognition from the Holy Father for the people of his country. It is also a challenge for Madagascar to work to alleviate the suffering of many poor people in their society. Although the country is rich in resources, “we are among the poorest countries in the world,” observed Cardinal Tsarahazana.

Church must continue to proclaim joy of the Gospel

The new Cardinal also spoke about the challenges of his Archdiocese (Toamasina). Most of the difficulties stem from a general lack of infrastructure and roads. This makes pastoral work difficult. Notwithstanding the challenges, the new Cardinal says the Church must continue to encourage peace among citizens and as a Church live and proclaim the joy of the Gospel to all Madagascans.

In an earlier interview with the Catholic Church organisation, Church in Need, Cardinal Tzarahazana also spoke about his worries concerning the encroachment , in the northern parts of the country, of a certain brand of Islam bent on expansionism.