Hardships Along the Way Mark the Experience of 21st Century Migrants 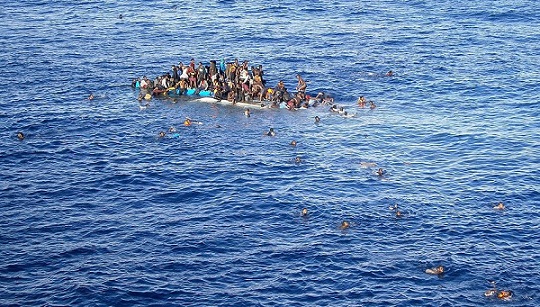 Hardships Along the Way Mark the Experience of 21st Century Migrants

At the level of public perception, it’s often assumed that migrants from war-torn and chronically poor parts of the world trying to reach Europe or North America would do anything to get in. What’s often not understood is the incredible hardships they often face along the way.

Korkiss Diallo, a 23-year-old from Ivory Coast who left in 2011 and is today living in Italy, illustrates the point: “If I knew what was waiting for me on the road,” he said Tuesday, “I would not have come.”

Once a teenager who dreamed of playing soccer for a living, Diallo is today a refugee in Italy, who’s building a life for himself thanks to the support of a local family and the international papal charity Caritas, which, at a local level, runs a program called “A refugee in my home.”

“I’ve left my younger sister and my grandmother behind,” he told reporters on Tuesday. He’s currently living in the northern Italian province of Trentino working hard making pizzas- a trade he learned thanks to the family that gave him a home – and hopes he can support himself enough to bring at least his sister to Italy.

“Grandma is too old,” he said, with sadness in his voice.

Before he brings his sister, however, Diallo wants to make sure that she doesn’t have to take the road he took to get to Italy, back in 2014, after he spent three years surviving it.

“If you can’t come by plane, don’t come at all. It’s not worth risking your life,” he said, adding that it’s advice he’s given to all his African friends.

Even though he’s been able to build a life in Italy, looking back to what he went through during the three years he was on the road, he said, still makes him “very sad.”

His initial destination was either Morocco or Guinea, but he wasn’t able to reach either place because he was undocumented. His journey took him instead to Mali, Burkina Faso and Niger.

Eventually, he went with a friend to Libya, with the hope of reaching Europe. When he got there, he said, he was jailed for three months until he escaped. After working in Libya for six months doing menial jobs, he decided to embark on a journey to Europe.

“They told us it was a six or seven hour journey,” he said. Instead, the boat he was in was adrift for a week, before he was rescued in Italian waters. He sought asylum in Italy, and not long after he made it to Rome, where he was taken in by Caritas. Upon the suggestion of the Catholic NGO, he joined the “A refugee in my home” program.

The rest, as they say, is history.

There are currently 500 migrants and refugees benefiting from the Caritas project, who’ve been welcomed by families, parishes and religious institutes. It’s a project aimed at helping those arriving to integrate into Italian society, and the process lasts at least 12 months. In the case of Diallo, however, he sees it as having found a new family, and it’s a “life-long one.”

Tommaso, Diallo’s Italian younger “brother,” told reporters that the family had learned a lot from Korkiss, and “I hope we also taught something to him.”

Diallo spoke with journalists during a lunch organized by Caritas in Rome as part of a two-year global campaign launched in an attempt to answer Pope Francis’s call to promote the culture of encounter between communities and migrants and refugees.

Called “Share the journey,” it includes a Global Action Week June 19-24, and Caritas affiliates around the world are organizing lunches and activities similar to the one held in Rome on Tuesday.

The website of the campaign explains, “Migrants and refugees may have gone through periods of hunger and difficulty or they may have faced solitude and rejection rather than welcome. Through your Caritas organization you can either attend a meal or identify new and long-standing migrants in your community whom you can invite to a meal you organize.”

Francis, a loud advocate for welcoming and integrating refugees, inaugurated the Share the Journey campaign in 2017. During the launch, the pope reminded everyone that not only are migrants on a journey, but also the communities which they leave and which receive them are part of it.

On Tuesday, he sent a message to the Caritas lunch, urging Catholics around the globe to participate in similar actions to raise awareness “on the global scale” in support of migrants and refugees.

“Today, I would like to invite everyone – migrants, refugees, Caritas workers and institutions – to grasp the features of this journey that have marked you the most: what hope does your journey lead to? Try to share this thought and celebrate what we have in common,” the pope said in his message.

According to a list published by British newspaper The Guardian, 34,361 migrants and refugees are known to have died trying to arrive in Europe from Africa and the Middle East since 1993. Thousands more are believed to have died “anonymously.”

The global awareness week comes as several countries around the globe, from the United States to Hungary and Italy, are toughening their anti-immigration laws. On Wednesday, considered the International Refugee Day, Hungary passed a bill that makes it illegal to help immigrants.

Asked about what he would say to those who fear refugees, Diallo said, “Many here think that all Africans are bad people, that they steal, that they do illegal things. But this is unfair.”