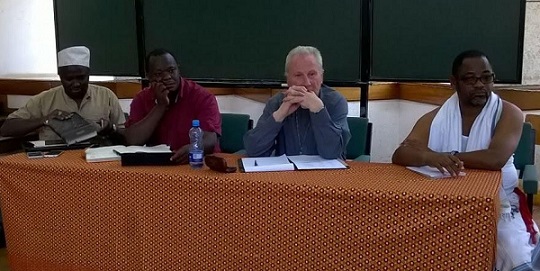 A group of different religions and movements in Kenya gathered in Nairobi to commemorate the 50th anniversary of NOSTRA AETATE, the Vatican II the declaration on the relation of the Church to non-Christian religions.

Known as the declaration on the relation of the Church to non-Christian religions, NOSTRA AETATE was proclaimed by Pope Paul VI October 28, 1965 with the aim to promote unity among Christians and Non- Christians all over the world.

“This document, NOSTRA AETATE was given to encourage Catholics to see the values of other religions and to encourage corporation with people of other religions,” the former president and secretary of the Pontifical Council for inter-religious dialogue in the Vatican, Archbishop Michael FitzGerald said, told the participants at the conference and clarified that the cooperation was intended to be not only among religious leaders but also “among the members of different religions.”

“We are rather late with the 50 years’ celebration, I would say, but it doesn’t matter,” said the Archbishop who is also the former Nuncio to Egypt.

“There has been series of celebrations especially in 2015 where I also took part in London, Bungalow and Tel Aviv but what matters is that the document is still alive and inspirational to us,” Archbishop FitzGerald continued and added, “If the different religions are coming together and working together, this is a contribution to the intention and development of the Nostra Aetate.”

The two-day conference, which concluded Saturday, March 18, brought together the various groups working for interfaith dialogue in Kenya, representatives of various denominations including Catholics, Muslims, African traditional religions, Hindus-Hare Krishna, Jews, as well organizations such as the Shalom Centre for Conflict Resolution and Reconciliation, the Ecumenical Centre for Justice and Peace (ECJP) and the Association for Development Cooperation (ADC).

According to the director of religious affairs of the Supreme Council of Kenya Muslims (SUPKEM), Dr. Sheikh Hassan Kinywa Omari, the Nostra Aetate is a document whose content has a lot for the different religions to learn from.

“Nostra Aetate is one of the shortest Catholic documents which has a lot of meaning to interfaith dialogue,” Dr. Hassan said, adding, “We know that people are talking of peace and unity everywhere in the world, and this is the intent of inter-religious dialogue; we have arranged this symposium in such a way that different religions have been invited, and have presented practical implementations of Popes view on interfaith dialogue.”

The conference took place at Tangaza University College (TUC), a Constituent of Catholic University of Eastern Africa (CUEA), with TUC’s School of Theology under the department of Mission and Islamic studies as the main organizer.

“Apart from celebrating Nostra Aetate, we related this symposium with the forth coming general elections given that we are talking about peace and religious leaders in the past few years have become so instrumental in facilitating peace-talks in the country,” Father Charles Odira, one of the lectures at TUC’s department of Missions and Islamic studies said.

“Peace is at the core of every religious aspirations and so through collaboration with all these religions, we can have better ways of ensuring peaceful elections to reduce conflict and tension so that the religious people can give an alternative voice that may be lacking in the political parties,” Father Odira added.

On his part, Dr. Tsawe Munga wa Chidongo from the African Religion emphasized the fact that religions exist to promote unity and peace in the society.

“After the 2007/2008 post-election violence in Kenya, a movement meant to bring serenity in the society was formed and it began to preach peace, unity and forgiveness to the people,” Dr. Chidongo recalled.

“As a sign of solidarity, other communities in Kenya such as the Aembu, Ameru and Agikuyu who are believers of African Religion joined this movement and as I am talking, they have already conducted a peace-walk emphasizing on peaceful election ahead of the August 2017 election,” Dr. Chidongo revealed.

A book on inter-religious dialogue aimed at promoting ecumenism and for all people of goodwill who believe in promoting dialogue among religions was launched at the conference.