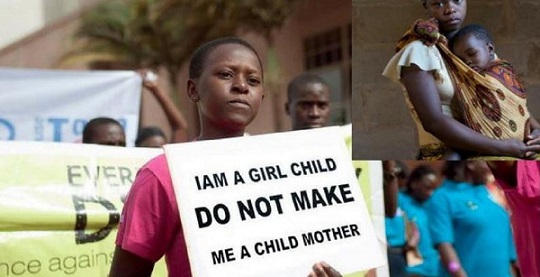 Church leaders are liaising with traditional tribal leaders, NGOs and the relevant government departments to end the practice of child marriage in Ghana. According to UNICEF, the UN’s children’s agency, 39 percent of girls in sub-Saharan Africa are married before 18, and 12 percent are married before the age of 15.

Ghana religious leaders are joining efforts to end the practice of child marriage in the west African country.

The Catholic Church, the Presbyterian Church, the Christ Apostolic Church International, and the Muslim community in August promised to use their sermons to discourage the practice.

Religious officials said sustainable marriages can only be made if the couples are happy, and that can only happen with the two parties freely consenting to get married. They added it was morally wrong for parents to force their kids into marriage.

Ghana already has one of the lowest rates of children who get married before they turn 18 in the region, but 21 percent of all marriages still involve an underage bride. The statistics are worse in northern Ghana, where 34 percent of girls are married before 18.

Church leaders are liaising with traditional tribal leaders, NGOs and the relevant government departments to end the practice.

The commitment comes within the framework of a two-year UNESCO-sponsored campaign implemented by Action Aid Ghana (AAG) that seeks to end child marriage in 12 districts and 120 communities in Ghana.

According to the coordinator of the project, Abena Anem-Adjei, the organization will be working with all community stakeholders to do away with the socio-cultural practices that encourage child marriages.

“We have also been sensitizing traditional, religious, and opinion leaders to use their authority to abolish and modernize some of the cultural and religious practices that expose girls to early marriages and to strongly declare their stand against child marriage,” she said.

On May 23, 2017, the Ghanaian Minister for Gender, Children, and Social Protection, Otiko Afisa Djaba, launched a national strategy showing how the government would tackle child marriages between 2017 and 2026.

The strategy aims to “empower girls and boys to be better able to prevent and respond to child marriage; influence positive change in communities’ beliefs, attitudes and social norms; accelerate access to quality education, sexual and reproductive health information and services; ensure the legal and policy frameworks related to ending child marriage are in place, effectively enforced and implemented; and increase the quality and amount of data and evidence available to inform policy and programming.”

“[This strategy] is the beginning of the journey to truly end child marriage,” Djaba said.

“Children below 18 should be learning and playing, not getting married or being mothers,” she added.

Foster Adzraku of the Child Marriage Unit in the Ministry described the strategy as “a huge step towards ending child marriage,” and said the unit will work to “get the buy-in and commitments of all partners to ensure an effective roll-out of the strategy across Ghana.”

Adzrake added the unit will also lead an effort to “identify strategies that are being implemented to find out what works and what is not working.”

Ghana has long led efforts in the region to end child marriage.

Africa accounts for 17 of the 20 countries around the world with the highest rates of child marriage.

Ghana’s numbers are nearly half that, in part due to the fact the Children’s Acts of 1998 criminalizes child marriages, and the government has sponsored several media awareness campaigns.

But Cornelius Williams, UNICEF’s associate director for child protection, says laws alone cannot stop the practice in Ghana, and called for the effective implementation of best practices as the “best antidotes to the issue.”

Poverty, limited education, as well as early pregnancies are some of the primary causes of child marriage, according to Dr. Adelaide Kastner, the chairperson of the advisory council for World Vision International Ghana.

“Sometimes girls themselves choose to be in a union because they perceive it to be what is expected of them, maybe to gain some status and recognition in the community, to escape from poverty or non-supportive family environment, or only because they have dropped out of school and don’t have any other viable alternative,” she said.

While Ghana seems to have taken the lead, the problem is being acknowledged across the continent.

President Edgar Chagwa Lungu of Zambia who said that 20 out of the 30 countries in Africa with the highest prevalence rates are implementing an African Union initiative to end child marriage by 2030.

“Zambia continues to place importance on keeping girls in school as a key to ending child marriage. Even those who have fallen pregnant have been given the opportunity to go back to school through our re-entry policy,” Lungu told the African Union in July.

“This is a strategy which we should all adopt as it will result in the empowerment of the larger African population and ultimately lead to sustainable development for the continent.”