From “We can’t” to “Of course we can, absolutely”: Women Religious in Nigeria 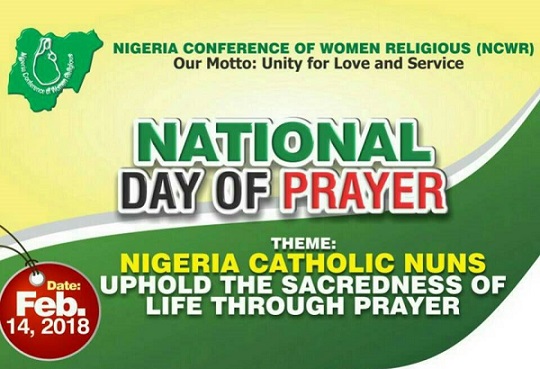 From “We can’t” to “Of course we can, absolutely”: Women Religious in Nigeria

Ash Wednesday, February 14, 2018, from 10am to 12 noon, women religious in Nigeria held a National Day of Prayer and fasting across the country to uphold the sacredness of life.

The sisters invited Nigerians and all people of good will to join them to stop the senseless killings and bloodshed in the country.

They demanded that the Nigerian government and elected officials live up to their responsibility by working toward creating a safe environment for everyone living in the country, and that security agencies use the resources at their disposal to protect the lives of all people and not just very few.

The team facilitated the sisters’ reflection on religious vocation and justice ministry, focusing the discussion on structures of injustice in Nigeria, structure that create and promote human suffering and perpetuate poverty situations.

The sisters also discussed ways they could give leadership in the fight against the structures of injustice beyond providing services to the victims of these structures.

The sisters who represent the various religious congregations of women in Nigeria expressed great concern over increased violent communal clashes especially between farmers and pastoralists, the senseless killings and wanton destruction of human lives, incessant kidnappings, and violence against women and girls.

They recalled just a few months before the workshop, when one of the participating major superior and her councilors were kidnapped for ransom and held in the kidnappers’ dungeon for weeks, and when six nuns from another community were kidnapped and held for months.

The sisters noted that these violent situations breach the sacredness of life, diminish the dignity of the person, threaten communal existence and negatively impact economic, social, religious and cultural lives of the people.

On their part, the AFJN team challenged the sisters to use their leadership position and collective moral voice to bring the situation in the country to the public square.

Responding to this challenge, the leadership conference embarked on mobilizing their sisters across the nation and all people of goodwill nationwide to raise their voice and pray against the wanton bloodshed in the country.

Their choice of Ash Wednesday draws attention to a day of prayer, fasting and repentance for wrongdoings, and echoes the response of the people of Nineveh to the warnings of the Prophet Jonah (Jonah 3).

Initially, the sisters had felt overwhelmed by the situation. However, as they reflected and prayed, they mustered their inner strength and their God-given potential to mobilize their communities and all people of goodwill to tackle this menace.

The women religious are moving from “we can’t” to “of course we can; absolutely,” full of energy that is almost palpable.

AFJN continues to work closely with the leadership conference in their first nationwide public witness.

The women religious in Nigeria and the AFJN team request prayers and support for the success of their initiatives.

They pray: May the sisters’ boldness and courage to act on behalf of justice in the public forum bring change of hearts; move the government and elected officials to act for the common good and bring consolation to many who have lost their loved ones to violence in Nigeria.